Online Poker in New Jersey Gets Green Light for 11/26

Regulators have confirmed that online poker in New Jersey will become a reality from Tuesday 26 November, subject to a satisfactory period of “soft play”. 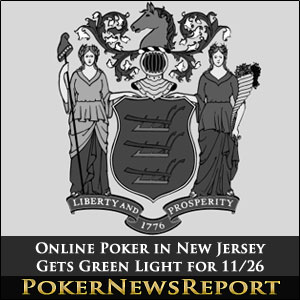 Regulators have confirmed that online poker in New Jersey will become a reality from Tuesday 26 November, subject to a satisfactory period of “soft play”.

On Friday, New Jersey´s Gaming Enforcement Division released a press release to the effect that Atlantic City´s casinos will be able to begin a period of “soft play” on Nov 21 which, if all goes well, will be followed by the green light for real money online poker in New Jersey from 9.00am EDT in the morning of Tuesday 26 November.

The “soft play” period will be available to invited guests only and although Robert Griffin, CEO of Trump Entertainment Resorts, is excited at the prospect of being able to offer real money Internet poker in New Jersey, he says that the regulators have not made it clear how the guests who are invited to test the software will be selected.

Trump Resorts are in the unusual situation whereby they will be using separate software providers in each of the company´s two resorts – the Trump Taj Mahal has joined up with Nevada-based Ultimate Gaming, while the Trump Plaza are rumoured to have formed a partnership with betting exchange company Betfair.

A Significant Revenue Stream or Loss on Income on the Boardwalk

Observers are divided on how the introduction of online poker will affect the fortunes of Atlantic City. Robert Griffin believes that it is going to be a significant revenue stream. It has the potential to make up 20 percent of our revenue, while other are suggesting that online gambling in New Jersey will raise hundreds of millions of dollars for the State economy.

State Senator, Ray Lesniak – one of the architects of online poker legislation in New Jersey – has predicted that New Jersey will become “the Silicon Valley of Internet gaming,” attracting high-tech, high-paying jobs. Lesniak has also suggested that other States will want to enter into multistate compacts for online gambling with New Jersey because of its relatively large population.

However, opponents to online poker are worried that online gamblers will stop visiting Atlantic City when the option of playing poker from home becomes a reality. There are those who have also expressed concerns that the availability of online poker will encourage compulsive gambling or underage gambling (the minimum age for online players in New Jersey in 21).

Who is in Bed with Whom?

In addition to the two Trump Resort partnerships, eight of the remaining ten Atlantic City casinos are applying for operating licenses in preparation for when online poker in New Jersey receives the green light.

Caesars, Harrah´s, Bally´s and the Showboat Casino Hotel (all owned by Caesars Entertainment) have partnered up with 888Poker, while the Borgata is teaming up with Bwin.Party to provide online poker. The Tropicana Casino will have “Jackpot Joy” poker provided for it by Gamesys Limited and it has been well chronicled that PokerStars are pursuing a license through the Resorts Casino.

With the Golden Nugget offering its own name brand of online poker using Bally Technologies, only the Atlantic Club Casino and the Revel Casino Hotel are yet to reveal their hands about whether or not (and who with) they will be joining the online party on 26 November.