An online gambling bill in New Jersey was approved by a Senate Committee but still a long way from the quest to be first state to offer intrastate online poker. 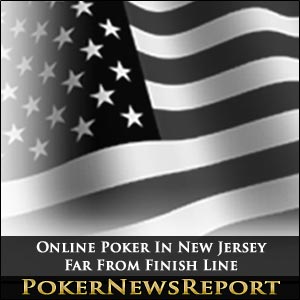 An online gambling bill in New Jersey was approved by a Senate Committee but still remains a long way from the winner’s circle as opposition from the state’s horse racing industry is expected to delay New Jersey’s quest to be the first state to offer intrastate online poker.

The bill advanced out of the committee on a vote of 3-0 with two committee members abstaining, but was not supported by horse racing interests such as the Standardbred Breeders and Owners Association of New Jersey, who feel that online poker and gambling would cannibalize the revenue currently obtained by the horse racing industry.

A lobbyist for Freehold Raceway and Atlantic City Race Course, Barbara DeMarco, indicated that the horse racing industry may pursue legal action in the matter by telling the Daily Record that, “undoubtedly the racing industry will push to have a constitutional amendment.”

One of the bill’s sponsors, Senator Jim Whelan, who represents Atlantic City, was angered by tactics employed by horse racing lobbyists, who are hindering Whelan’s desire to win the race as the first state to provide online poker to its residents.

“I feel like I’m being blackmailed,” Whelan said. “I‘m open to discussion but I don’t like a gun being put to my head and being told, ‘You will do this or else we will blow this whole thing up.’”

Last year, Governor Chris Christie vetoed a version of the same bill over concerns about the expansion of gambling beyond Atlantic City, which would violate the state’s constitution. Last year’s bill included provisions that dedicated a share of revenue from new online gambling legislation to support New Jersey’s faltering horse racing industry. However, the latest bill recently approved by the Senate Government and Wagering Committee included no such provisions.

The Department of Justice ruling issued in December that found the 1961 Wire Act to apply only to sports betting has many states clamoring to enact legislation to bring online poker and casino gambling to their state residents. In addition to New Jersey, Nevada, Iowa and California are some of the states looking to add much-needed revenue to state coffers by providing internet poker.

“I think New Jersey should be in that [online poker] business,” Christie said last January. “I think we should be an epicenter for that business, but I want to do it right. I do not want to rush and get legislation that either doesn’t pass state constitutional muster, or creates other problems for us.“