Online Poker in Nevada May be Delayed

Three companies who were granted interactive gaming licenses in Nevada have requested extensions of time to complete laboratory testing of their products. 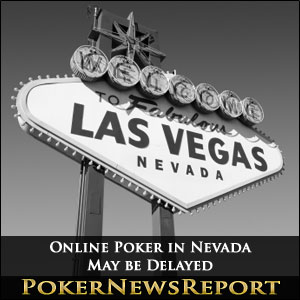 Three companies who were granted interactive gaming licenses in Nevada have requested extensions of time to complete laboratory testing of their products.

During a monthly meeting of the Nevada Gaming Control Board (GCB) held in Carson City, ACEP Interactive, Monarch Interactive and South Point Poker all requested six more months in which to conclude testing. The GCB recommended that each request be granted and the ultimate decision will be made by the Nevada Gaming Commission on Feb. 21.

Nevada’s gaming statute spells out the fact that once gaming officials approve the license of an applicant, activity must commence within a six-month period. Should the gaming commission approve of the trio’s request, and it is fully expected that they will, the gaming companies will have until August in which to complete software testing.

While all three companies explained to GCB board members that various stages of the testing process were underway, recent events may require additional testing. One such event is believed to be the likelihood that Nevada will amend its current intrastate online poker statute to allow for an interstate online poker scheme. Future agreements with other states to expand player pools and increase liquidity would require online poker sites to be able to accommodate more players than original projections.

If you’ll recall, South Point Poker had hopes of being Nevada’s first up and running poker site and had anticipated being online late last year. The site had been operating as a free-play offering since October of 2011 and believed it had a leg up on its competitors in the testing process. However, testing by independent third-party laboratories has taken longer than expected, prompting the request for extension of time.

Whether or not South Point Poker will still make history as America’s first legal online poker site remains to be seen, but filing an extension certainly doesn’t bode well for achieving that distinction. Rumors have been circulating that the first site to offer real-money poker may be ready in March. However, those rumors have not been corroborated.

Nevada still looks to be the state that will win the race to be the first to offer online poker to its residents. Delaware is the only other state that has enacted online gambling legislation and recently stated a desire to have Internet gambling sites up and running by Sept. 30.