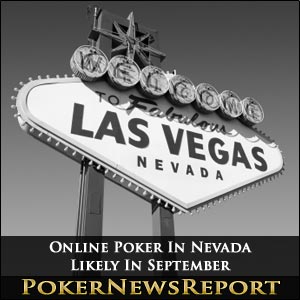 Silver State gaming officials had previously expected the first sites to be up and running around the holiday season in December or perhaps in early 2013. But South Point Poker has submitted its operating systems to independent testing well in advance of license approval and may be ready to go with real money poker in the fall.

We’re finishing up our second wave of testing and so far no problems, South Point CEO Michael Gaughan told eGamingReview.

South Point Hotel, Casino & Spa ‘s license application is set to be considered in August by the Nevada Gaming Control Board. A board recommendation for approval would then go before the Nevada Gaming Commission for official rubber-stamping of an online poker license. The next step in the process is normally testing by independent labs to make sure the software conforms to requirements, which can take several months. But since South Point Poker has been online as a free-play site since last year, they elected to be tested early in hopes of beating bigger name casinos such as Caesars and MGM Resorts to the punch of providing real money online poker to residents and tourists of Nevada.

I may not be the biggest or the best, but hopefully I’ll have a head start by two or three months. Gaughan added. Unfortunately [because we are] the first one, the regulator is putting a few more restrictions on us, and wants us to start a little slower than we would like. We will conform to their wishes, but at the end of the year it will be a full blown site in Nevada. Then we’ll try and go into the other states where it is legal and do some contracts there.

The launching of the free-play site last October had not been without its problems. It failed to attract as many players as Gaughan had hoped for, which he partially blames on Zen Entertainment, the supplier of the site’s poker platform. The rest of the blame Gaughan places on himself for not committing enough time to the project when things were not going well.

It was complicated and hard to download, Gaughan said. [The poor results were] partly down to the provider and partly because I lost interest in it when it didn’t grow as fast as I thought it would. Those troubles are seemingly in the past, as South Point has recruited a new Internet gaming provider.

The gaming commission has formally approved online poker licenses for both Bally Technologies and International Game Technology. Shuffle Master is expected to be the third company to be given the green light this week. There are roughly three dozen applicants vying to be licensed to operate online poker in the Silver State.