Intrastate online poker will likely be available to Nevada residents in the fall of this year, becoming the first state to offer legalized internet poker in the US. 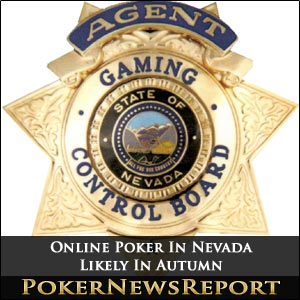 Intrastate online poker will likely be available to Nevada residents sometime in the fall of this year, becoming the first state to offer legalized internet poker in the United States, according to Mark Lipparelli, chairman of the Nevada Gaming Control Board.

“The process from here will see license applicants appearing on our public agendas in May/June,” Lipparelli recently told iGaming Business. “For the successful license applicants, the last step in turning the systems on will be a technical evaluation, and although we’re not certain how long this process will take, it’s plausible, even likely, that you’ll see the first set of systems approved for initial deployment by the fall.”

Nevada leads the way among states vying to be first to provide online poker on an intrastate basis. Other states in the running include Iowa, California and New Jersey. After several states are up and running with their online poker platforms, it is widely believed that many will form agreements or compacts to offer internet poker on an interstate framework.

Two dozen applicants have applied for licensing in Nevada. Among those 24 is a mixture of service providers and operators. The list reads like a Who’s Who in Gambling, with many well-known names in the industry submitting applications, including 888 Holdings, Bally Technologies, Caesars Entertainment, Shuffle Master, MGM Resorts, and Bwin.party.

Technical evaluations for operators who have applied is set for late spring and the beginning of summer. Of those who win licensure approval and were “thoughtful about their approach and had their systems reviewed by test labs in the past” can conceivably be operating online “by late fall and certainly by late winter or the early part of 2013,” Lipparelli said.

New Jersey is also in the running to be the first state to offer online poker, but has not made as much progress as Nevada and is still seeking passage from the House and Senate, as well as approval from Governor Chris Christie. The Garden State was first in passing online gambling legislation in January, 2011, but Christie vetoed the bill amid concerns of the state’s constitutional requirements. Since that time, Nevada has enacted legislation and approved regulations, taking the lead in the race to be first and setting a framework which other states are expected to follow in due course.