Online Poker In Nevada At South Point Possible In October

With South Point Poker set to receive formal approval from Nevada gaming officials Thursday, real-money online poker in the U.S. is only two months away. 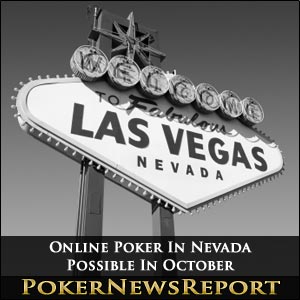 With South Point Poker set to receive formal approval from Nevada gaming officials Thursday, real-money online poker in the U.S. is only two months away.

The Nevada Gaming Commission’s (NGC) agenda for August 23 includes considering the matter of formally approving a license for South Point Poker to become an operator of an online poker site–the first in the state and the country. Actually, South Point has applied to be licensed in three separate categories–operator, manufacturer and service provider. Three companies–Bally Technologies, International Game Technology and Shuffle Master–have been approved in the manufacturing category.

Should South Point get rubber-stamped on Thursday–and all indications are that they will–its feasible that real-money online poker can commence in beta testing phase as early as October. This would allow South Point Hotel Casino and Spa to get a jump on the big boys such as MGM Grand and Caesar’s Entertainment.

But prior to approval, the NGC has outlined five stipulations that must be adhered to in order for South Point to make online gaming history. Gaming officials would like written acknowledgement detailing South Point’s plans for internal control, a plan of compliance related to interactive gaming, the establishment of an interactive gaming reserve, a plan of operation, and a list of employees who will maintain the site. These are new stipulations to ensure that all state requirements have been met.

South Point has been online as a free-play site since October. Its software and technology has already been undergoing testing by independent laboratories and the remainder of that process is expected to conclude well in advance of an October launch date. Once the casino has met all stipulation requirements, passed all testing, and paid a $500,000 license fee, the transition from free-play to real-money action for Nevada residents and tourists can commence.

Monarch Casino and Resort is also scheduled to go before the NGC on Thursday in hopes of obtaining an operators license and also has been given a set of stipulations to adhere to. The stipulations are not believed to be identical to that of South Point due to the fact that South Point is way ahead of other applicants by operating a free site for ten months already. Also, Monarch has yet to enter into a partnership agreement with a service provider.

All told, nearly three dozen companies have applied for a gaming license in the Silver State, with NRT Technology Corp. of Canada the latest to submit an application as a service provider. Some, such as South Point, have applied in more than one category. Thus far, gaming officials have received 11 applications for an online poker operators license, roughly 17 in the manufacturing category, and a couple dozen as service providers.