Iowans who were hoping to perhaps be playing regulated online poker this year will apparently have to wait until 2015 at the very least. 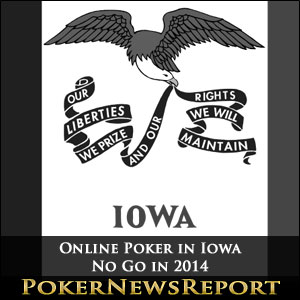 Iowans who were hoping to perhaps be playing regulated online poker this year will apparently have to wait until 2015 at the very least.

The Hawkeye State will not be joining Nevada, Delaware and New Jersey in the online poker party in 2014, according to Iowa Gaming Association president and CEO Wes Ehrecke. Similar to what some other states are doing, Iowa officials will likely take a wait and see approach in the present with regard to the Internet gambling regimes enacted in the three states that have already taken the plunge.

This is not an uncommon tactic, as legislatures in a number of states are reportedly carefully analyzing the results of the online gambling schemes that have only been running a couple months in Delaware and New Jersey and eight months in Nevada. Should the progress made in those regulated states that includes future interstate compact agreements be acceptable over a greater length of time, an online poker bill may find its way before the Iowa state legislature in 2015.

Along with careful study of the goings-on in the regulated states, Ehrecke told Casino Enterprise Management another reason why Iowa lawmakers will likely not get around to online poker consideration this year. The Iowa legislative session may be shorter by a couple weeks than in previous years, with ground-breaking and time-consuming proposals such as Internet gambling falling by the wayside as a result.

The state-by-state format of online poker and gambling legalization moves slowly and if too many states remain on the sidelines to watch the success of the others, then the glacial speed of regulation will move even slower. But with many states seeking ways to bolster revenue other than imposing more taxes on their citizens, Internet gambling appears to be a viable option.

Iowa’s commercial land-based casinos showed less than stellar results in 2013 and adding online poker to the offerings available may be a way to perk up those stale revenue totals. But it appears that at least another 12 months will go by before Iowa gets serious about making such a move.