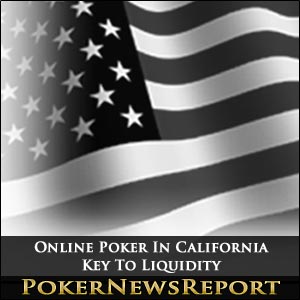 With the chances of online poker legislation at the federal level apparently not happening anytime soon, and Nevada on schedule to be up and running sometime in the fall of this year, an eventual interstate online poker format depends heavily on California joining the coterie with legalized internet poker.

Prior to Black Friday, an estimated 60% of online poker players in the United States, roughly 2 million players, were based in California, making it the largest market in America. It is this pool of players that is crucial to regulated internet poker via state compacts to become successful–at least in the early going.

When Nevada becomes the first state to offer online poker to its residents–and all indications are that it will–it will be drawing players from a population that ranks 35th among all states. Although the Silver State’s regulations will reportedly permit tourists to also play online poker while they are in Nevada, its still not a very large player pool to draw upon.

By eventually forming a compact with other states, especially its neighbor to the west, California, a substantial number of players could be had, increasing liquidity and making online poker in the U.S. very profitable for operators and the individual states that participate. Add a few more states that are debating online poker regulations such as New Jersey and Hawaii and you’re talking about the possibility of a decent amount of player traffic.

Following state compacts, it is anticipated that online poker operators would seek to allow residents of other countries to also be allowed to join the [geolink href=”https://www.pokernewsreport.com/us-poker-sites”]U.S. poker sites[/geolink], adding millions more potential players to the game. Should that become a reality, if they haven’t already acted, look for federal lawmakers to then become more serious about legalization on a federal level, as they would also want a piece of the pie of the lucrative tax revenue expected.

However, before all that happens, Nevada will need to get the ball rolling as the frontrunner in U.S. online poker legislation. But the key to successful interstate online poker hinges on the Golden State’s legalization of online poker and gambling. Late last month, California Senators Rod Wright and Darrel Steinberg introduced SB1463, which aims to legalize poker for an initial two-year period, after which other casino games may be phased in. Key components of the bill include the possibility of interstate agreements and the choice to opt in or out of any federal plan for online poker and gambling. A bit troubling, at this point, is the bill’s lack of provisions to enable players from other countries to join the scheme. However, that issue is so far down the road that the legislation may need only be amended should the opportunity for global access to players arise.

In 2011, California lawmakers sought, but failed to receive, legislative support for two online gambling bills. With the state in dire need of tax revenue, SB1463 is thought to have a better chance of succeeding than last year’s proposed bills. Let’s hope that the bill is enacted into law in the very near future, as player liquidity in a U.S. interstate online poker format depends on it.

2 Replies to “Online Poker In California Key To Liquidity”