Last Friday, the U.S. House Subcommittee on Commerce, Manufacturing, and Trade held its second hearing on internet gaming in as many months, with this month’s topic focusing in part on how proposed online poker legislation should be regulated at the federal and state levels. 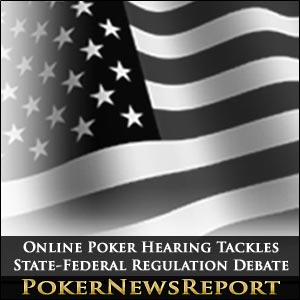 Last Friday, the U.S. House Subcommittee on Commerce, Manufacturing, and Trade held its second hearing on internet gaming in as many months, with this month’s topic focusing in part on how proposed online poker legislation should be regulated at the federal and state levels.

To recap the hearing entitled “Internet Gaming: Regulating in an Online World,” let’s begin with Chairwoman Mary Bono Mack (R-CA), who started out the two-hour hearing by stating that she was in favor of exercising caution before rushing into internet gaming legislation. “I am taking a very careful approach when it comes to this issue,” Bono Mack said. ” When it comes to the debate over internet gambling, is it time for Congress to let the genie out of the bottle? I want to make sure everyone is dealt a fair hand.”

Subcommittee member G.K. Butterfield (D-NC) felt that allocating funding for problem gambers was crucial in any proposed regulatory scheme. “This is a very important issue,” Butterfield said. “I think we can all agree on that. It deserves careful consideration. We must remember that the policy decisions we make here could also impact people who have never been exposed to internet gambling, potentially opening the door for dependence and addiction. We must set aside a portion of revenues to reduce the social costs of problem gambling.”

Congressman Joe Barton (R-TX), who authored the HR2366 bill that would legalize online poker in the U.S. on a state-by-state basis, tackled the issue of state’s rights. “It is legal to play poker online, but it’s impossible to handle the financial transactions of winning and losing because of a law called UIGEA,” Barton said. “UIGEA needs to be reformed… The bill I introduced is a states’ rights bill. It allows states to make decisions on whether citizens in their states can play poker online.”

Congressman Frank Wolf (R-VA), sitting on one of two panels of witnesses, strongly argued against internet gaming. “The legalization of internet poker will enable the spread of gambling through every computer, every iPad, every Android, and every Windows phone in this country,” Wold insisted. “The tax revenues would come out of the pockets of the most vulnerable populations.”

Charles McIntyre, Executive Director of the New Hampshire Lottery Commission, sat on the second panel and offered his opinion. “The question of whether to expand gambling onto the internet should be decided by each individual state,” McIntyre said. “A state should maintain its right to determine its level of tolerance within its own borders.”

American Gaming Association (AGA) President and CEO Frank Fahrenkopf testified on the AGA’s stance on the rights of individual states. “We support Federal legislation that will allow states to license and regulate online poker, while also ensuring each state has the right to determine whether the activity is permissible for residents of that state,” Fahrenkopf said. “We should strengthen the Wire Act with confirming amendments to the UIGEA to outlaw illegal internet gambling.”

Fahrenkopf also added, “States’ rights must be recognized. States should have the right to determine what exists in their states, how they’re going to regulate it, and how they’re going to tax it.” He also noted that the UIGEA, as it is currently written, already allows an exemption for intrastate online gambling. Fahrenkopf concluded, “Internet poker should be legalized.”

One panelist who foresees problems with state-by-state regulation of internet gaming was Rachel Volberg, Senior Research Scientist at the University of Chicago, who believed that each state will encounter the possible ill effects of online gambling differently. “There is not equal political will in every state,” Volberg said. “What you get is variability across the states in terms of what they’re willing and able to do. Some states will do a very good job, but other states are going to do less good of a job.”

Mark Lipparelli, Chairman of the Nevada Gaming Control Board, expressed his thoughts on the state-federal legislation debate. “We support a national model that gives states a degree of framework for regulation,” Lipparelli said. “Given this is an activity that crosses state borders, it’s important to have some harmony. Today, there are 40-some different regulatory structures and from a private industry perspective, it has become increasingly problematic and expensive to be responsible to [so many] different regulatory schemes.”

Finally, the issue of whether online gaming would cannibalize or destroy land-based casino gambling revenues arose. The AGA’s Fahrenkopf opined, “If [internet gambling] did cannibalize, it would be marginal. We’re only talking about poker. Our position is that it should only be poker. It could [cannibalize land-based gaming], although the demographic of people that play online – young men who are between the ages of 18 and 24 with higher education – tend not to be the same people who go to land-based casinos. It would probably be a profit center.”