The push to legalize online poker and to regulate the industry in order to protect players has received backing from a couple of heavy hitters. 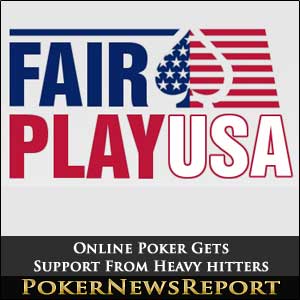 The push to legalize online poker and to regulate the industry in order to protect players has received backing from a couple of heavy hitters.

Many offshore internet gambling websites are operating in violation of state and federal laws, exposing millions of bettors to risking their money with no safeguards of consumer protection in place. One need look no further than Full Tilt Poker and Absolute Poker to see that regulation and protection is needed. Thousands of poker players who have account balances at those [geolink href=”https://www.pokernewsreport.com/online-poker-rooms”]poker websites[/geolink] are still waiting and hoping to be paid.

Despite the Black Friday indictments of the three largest internet poker sites, Freeh and Ridge believe that existing laws on online gaming has not been effective. They support legislation that would allow authorities to oversee internet gambling websites.

“The fact is there are millions and millions of people playing the game today,” Ridge said. Congress in 2006 decided to prohibit all internet gambling. Was it well-intentioned? Yes. Has it been effective? With respect to those who thought they were doing the right thing by banning it, the answer is unequivocally no.

FairPlayUsa officials said they are working with those groups to back federal regulations that define online gambling and protect consumers.

In addition to Freeh and Ridge, the advisory board of FairPlayUsa includes Greg “Fossilman” Raymer, the 2004 World Series of Poker Main Event champion and Mike Sexton, commentator on the World Poker Tour for the past 10 seasons..