Online poker players were presented with a Christmas gift of sorts by the U.S. Department of Justice (DoJ) as the DoJ clarified its stance on the 1961 Wire Act by releasing an opinion stating that the Act applies only to sports betting and does not encompass online poker. 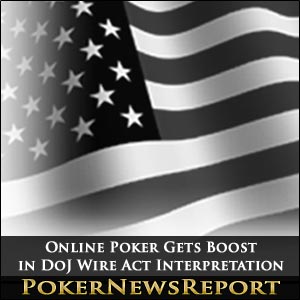 Online poker players were presented with a Christmas gift of sorts by the U.S. Department of Justice (DoJ) as the DoJ clarified its stance on the 1961 Wire Act by releasing an opinion stating that the Act applies only to sports betting and does not encompass online poker.

The states of New York and Illinois had proposals in place to use the internet for lottery sales and requested the DoJ to clear up the Wire Act’s intent as well as its possible conflict with the Unlawful Internet Gambling Enforcement Act (UIGEA). In the opinion written by Assistant Attorney General Virginia A. Seitz, the two states were given the go-ahead to transact lottery sales via internet since the lotteries are not sporting events. However, the DoJ did not fully consider the Wire Act in conjunction with the UIGEA, stating that their relation to each other is not applicable in this particular situation.

“This is a much needed clarification of an antiquated and often confusing law,” Poker Players Alliance (PPA) Executive Director John Pappas said. “For years, legal scholars and even the courts have debated whether the Wire Act applies to non-sporting activity. Today’s announcement validates the fact that internet poker does not violate this law.”

The DoJ announcement could mean that online poker services could be provided by individual states or a consortium of states banding together. Nevada has already accepted license applications for online poker to be offered intrastate. However, many in the industry, including the PPA as the main lobbying organization for online poker players, would rather see legislation come to fruition on the federal level.

“It is our hope that our federal policymakers see this as an incentive to move quickly to enact federal licensing and regulation before various states produce a mix of individual state schemes that may not be the best model to serve consumers,” Pappas said.

It is believed that regulations at the state level would prohibit liquidity and not provide enough of a customer base or player pool to make the effort worthwhile because the individual states would be confined to accepting players only within their borders.

The American Gaming Association (AGA) also issued a statement calling for federal legislation of gaming and [geolink href=”https://www.pokernewsreport.com/online-poker-rooms”]poker websites[/geolink], stating that the DoJ’s opinion may now cause “a proliferation of domestic and foreign, unlicensed, and unregulated gaming websites without consistent regulatory standards and safeguards against fraud, underage gambling, and money laundering.”

PPA Chairman Alfonse D’Amato also urged federal lawmakers to get on the ball, saying, “State-by-state licensing and regulation could result in a balkanized online poker world where players across the nation would be limited in their choices of where and against whom they could play. This could potentially reduce the number of total players, reducing revenues state lawmakers project from this activity.”

The DoJ, upon indicting Full Tilt Poker, PokerStars, Absolute Poker and 11 individuals for fraud, money laundering and violating the UIGEA by processing gambling payments in April, did not include the Wire Act as a basis for the allegations. Many industry insiders feel that the UIGEA also needs clarification, as legal experts have cited the vagueness of the wording in the legislation, causing its interpretation to be clouded or difficult.