A tribal conference was held the past two days in California that centered on issues pertaining to tribal interests in the legalization of online poker. 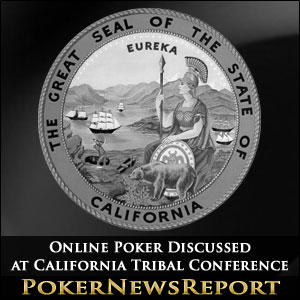 A tribal conference was held the past two days in California that centered on issues pertaining to tribal interests in the legalization of online poker.

Indian Country Online: The 2013 Congress touched upon many topics that are crucial to California tribes and the prospects of expanding their current online gaming operations to include Internet poker. The conference was co-presented by Pechanga.net and the Spectrum Gaming Group at the Pechanga Resort and Casino in Temecula.

Much of the discussion focused on whether state or federal legislation would be more beneficial to tribal interests. Some tribes are said to prefer an intrastate model that would keep the nation’s most populous state from forming compacts with other states. Other tribes believe that a federal scheme may prove more worthwhile in the long run.

Most tribal groups seemed to be in agreement that previous federal bills that have been drafted have not done well in fully representing the interests of tribes. This is an important matter of concern, as it may cause California to opt out of any federal online poker legislation that finds approval in the future. Naturally, the rest of the country would love to include California and its more than 38 million residents in an interstate poker model to increase liquidity and profits.

Though there is talk of new federal online gambling legislation being introduced this summer, the tribes seem more focused on the bills currently before the California state legislature. Those proposals are SB 51 introduced by Sen. Roderick Wright and Sen. Lou Correa’s SB 678. Another measure that was drafted in a joint effort among eight of the state’s most prominent tribes has received some attention, although the proposal missed the deadline for introduction in the current legislative session.

Wright’s bill includes racetracks and advance deposit wagering firms, while the tribal proposal seeks to exclude horse racing interests from participating in the state’s online poker regime. This has long been a contentious point among California’s tribes, card rooms and horsemen. It is a major reason why votes have never been counted in regards to online poker legislation.

Also mentioned during the two-day affair were matters such as operating costs and marketing efforts needed to attract online players. Gaming via the use of mobile devices was another topic of interest. With the proliferation of cell phone usage, the number of players who log on while on the go has increased and is expected to rise considerably in coming years.

The California Gambling Control Commission was represented at the conference by Commissioner Richard Schuetz, who had some interesting insights regarding legislation. First and foremost is that the CGCC is fully prepared to regulate Internet poker as soon as lawmakers are able to approve a proposal. But drafting a bill that pleases all of the state’s gaming interests has been a sticking point thus far.