Online Poker Could Again be Addressed at Federal Levels

AGA President Fahrenkopf believes that a federal poker bill could be again addressed this year on Capitol Hill. 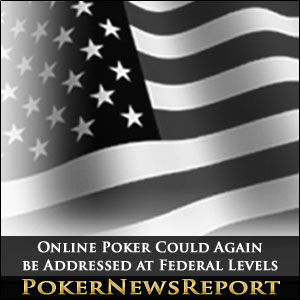 AGA President Fahrenkopf believes that a federal poker bill could be again addressed this year on Capitol Hill.

CEO and President of the American Gaming Association has said that he believes a federal bill that would legalize online poker could be once again addressed on Capitol Hill this year. Frank Fahrenkopf, who has held this position for 18 years and who will be stepping down in June, was speaking at the 2013 iGaming North America Conference.

The conference which was held at Planet Hollywood Resorts, attracted gaming regulators and gambling company executives from all over the world. Fahrenkopf was addressing a question and answer session at the conference and said that he expects Rep. Joe Barton, to push forward an internet poker-only bill in the House. This has been attempted in the past by Barton but he did not manage to get enough support.

Last year a similar bill was worked on by Senate majority leader Harry Reid and former Senator Jon Kyl, but it never came to fruition, despite strong support of the AGA. Fahrenkopf said that he and other leaders in the gaming industry had been very disappointed by last year’s failed bill and said he would not be surprised if another bill was introduced in this session.

Proponent of the bill, Sen. Kyl will soon be retiring so the AGA President plans on finding another conservative Republican from a state that does not yet offer online gaming to support the proposed federal online poker bill. Fahrenkopf blamed Puritanism as the reason to why the United States was lagging behind in online gaming legislation.

Fahrenkopf said that there are opponents to the legalization of online poker on both the left and the right and this is one of the major hurdles for the passing of the bill. He claimed that some politicians on the far right oppose gambling for religious reasons, while those on the left feel that people are not clever enough to make the right decisions about gambling and need the governments help.

The outgoing CEO of the AGA said that the federal bill would be the best scenario for online casinos, operators and players. He said that the online gaming companies would be forced to implement consumer protection programs and policies to prevent underage gambling which would benefit the entire industry.