Rumors have been circulating that two online poker bills introduced this year by California lawmakers have stalled and likely won’t advance in 2013. 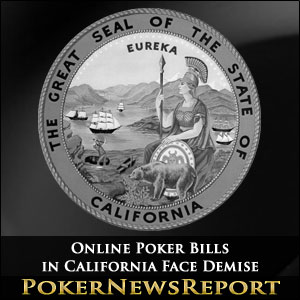 Rumors have been circulating that two online poker bills introduced this year by California lawmakers have stalled and likely won’t advance in 2013.

The same reasons that have buried bills in years past continue to plague online poker legislative prospects in the Golden State. That being in-fighting among the state’s gaming interests led by powerful tribal gaming concerns.

The California tribes, cardrooms, and horse-racing industry have long been at odds on how the state’s online poker pie should be divided. But the failure to reach a concensus among the trio has left all of them hungry with no resolution in sight.

The current legislative session is set to end on September 6 and if SB 678 or SB 51 fail to move forward prior to then, state legislators will have to re-visit the matter in 2014, Card Player reported. A special session could be called after the close of the current session next month. But the prospects of that seem unlikely considering the lack of progress made thus far.

There is also a bill that was drafted earlier this year by eight of the state’s tribes entitled the “Internet Poker Consumer Protection Act of 2013.” That proposal excludes racetracks from participating, which seems to be one of the major reasons why legislative advancement has perennially stagnated.

With a population of some 37 million, California would be a much sought after partner in any interstate online poker regime. However, failure to make any progress leaves California as just one of a number of states that have merely considered online gaming legislation.

If an online poker bill is ever to make headway in the Golden State, it appears that Indian tribes will have to make some concessions and permit horse racing interests to be included in the plan. Until that happens, it looks as though Californians will have to continue visiting the state’s many cardrooms in order to play poker.