Online Poker Bill To Be Proposed In Iowa Later This Month

Iowa State senator Jeff Danielson (D-Cedar Falls) said that he will be proposing a bill within a few weeks that would regulate online poker in the Hawkeye State. 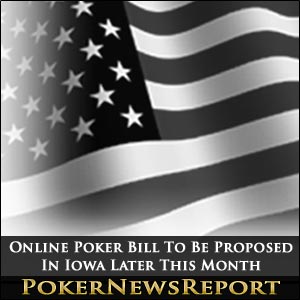 Iowa State senator Jeff Danielson (D-Cedar Falls) said that he will be proposing a bill within a few weeks that would regulate online poker in the Hawkeye State.

Danielson’s proposal comes on the heels of the U.S. Department of Justice (DoJ) memorandum in December that clarified the 1961 Wire Act as being applicable only to sports betting. The antiquated law had previously been cited as legislation prohibiting states from running online gambling sites. The DoJ’s ruling “took a significant hurdle away from the ability to play poker online,” Danielson said.

As of now, the only two states that have passed online poker legislation are Nevada and the District of Columbia, but the D.C. measure is receiving flack from City Council members. Various other states, including New Jersey, California, Connecticut and Florida, are considering online poker bills of their own.

“We believe by the end of this year you will see a handful of states continue to authorize it,” Danielson said. “Because of the DoJ’s opinion, we believe you’ll see very quickly multi-state compacts.”

Danielson’s online poker proposal set to be introduced later this month may not pass easily, as other Iowa lawmakers have differing views on legalized internet poker being available to their constituents. State representative Jeff Kaufmann (R-Wilton) has gone on record as vowing to fight the proposal, saying, “I have a problem any time we’re talking about an expansion of gambling.”

Despite evidence that many Iowa residents are currently gambling online, Kaufmann is unconvinced that a majority of Iowans are in favor of online poker legislation and believes that the harm caused by legalized gambling far outweighs the good brought by additional tax revenue to the state.

A recent study estimated that online poker in Iowa could generate anywhere from $13 to $60 million in one year, which would result in $3 to $13 million in tax revenues for the state. But Danielson said that money is not necessarily the impetus for passing online poker legislation.

“I don’t give two hoots about the revenue for the state,” Danielson said. “We’re in the black. We have a surplus. I don’t think that’s the reason to do this.”

Kaufmann doesn’t agree that its not about the money. “I think it’s about dollars coming into the state coffers,” Kaufmann said. “I think it’s about dollars going into the pockets of people that own these casinos. A lot of those owners are in Nevada and they’re on the west coast, and they’re not here in this state. I’d rather talk about property tax for the rest of the session rather than spend two days talking about gambling.”