A bill proposing online poker legalization in Mississippi failed to make it after only three weeks since its proposal, killing any hopes of internet poker coming to the state in near future. 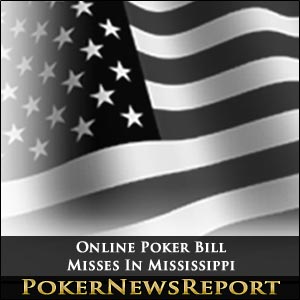 A bill proposing the legalization of online poker and gambling in Mississippi failed to make it out of committee after only three weeks since its proposal, killing any hopes of internet poker coming to the Hospitality State in the near future.

The 2012 Mississippi Lawful Internet Gaming Act, proposed by Rep. Bobby Moak (R-Lincoln County) in light of the U.S. Department of Justice’s December ruling that found the 1961 Wire Act to be applicable only to sports wagering, would have permitted the state’s existing casinos to offer internet poker and gambling.

There are currently 30 casino gaming licenses in Mississippi and approximately 130 live poker tables among those licensees. MGM Resorts, Boyd Gaming and Caesars Entertainment, who are on the list of applicants to provide online poker to Nevada residents, all have an established presence in Mississippi.

Moak was disappointed that his proposal was mucked, but was not completely surprised. “We’re in a state that is also politically charged anytime you are going to discuss gaming issues, liquor issues, or any so-called ‘sin’ issue,” Moak said. “There’s just not an awful lot of volunteers who want to get out there and tackle those.”

Mississippi joins the District of Columbia as states who have recently scrapped plans to legalize online poker and gambling. Nevada currently leads the race to be the first state to offer online poker to its residents, with a launching date of autumn of this year optimistically set by Nevada Gaming Control Board officials. New Jersey trails Nevada, but approval from the state legislature may come as early as this week. Iowa and California are also working toward enacting online poker and gambling legislation, but recent rumors have been circulating that 70% of surveyed Iowans are against the measure.

Mississippi legalized live casino gambling in 1990. Gross revenue among its 30 casinos reached almost $2.4 billion last year, its lowest total in 13 years. Moak is said to be considering reintroducing the online poker and gambling bill at a later date.