The possibility of regulated online poker spreading throughout the U.S. just received a boost as an online poker bill was introduced to New York lawmakers. 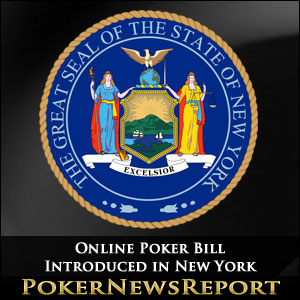 The possibility of regulated online poker spreading throughout the U.S. just received a boost as an online poker bill was introduced to New York lawmakers.

New York is the third most populous state with almost 20 million residents and the proposal’s sponsor, State Senator John Bonacic, made sure to include a provision that allows for interstate partnerships. That is a huge boon to the likes of Nevada and Delaware, who already have forged an alliance and have invited other states to join their Multi-State Internet Gaming Agreement.

Should New York eventually join the party, that would offset the expected snub from California, who as the nation’s largest state with 38 million, seems intent on restricting its online poker regime to an intrastate model. Two poker-only bills are pending in the Golden State and both are designed to include only those located within California.

Bonacic’s measure, S 6913, is also poker-only and would be in play upon receiving the signature of Governor Andrew Cuomo. Allowing for 180 days to implement rules and another 180 days for licensing potential operators, online poker players in New York could be playing legally within one year of the governor’s approval.

A $10 million licensing fee that is good for the same number of years at a 15% rate of tax are some of the particulars of the proposal. A bad actor clause is included, giving the cold shoulder to gaming companies who catered to the U.S. market from the beginning of 2007 forward.
The bill heads for debate to the Committee on Racing, Gaming and Wagering, which Bonacic dutifully chairs.

The intoduction of S 6913 comes just days after a federal bill seeking to ban online gambling was introduced on the federal level. Backed by Sheldon Adelson’s Coalition to Stop Internet Gambling, the measure was volleyed in both chambers of Congress last week but has critics doubting its ability to find approval among legislators.

New York voters approved brick and mortar gambling expansion in a referendum last November that had the full support of Governor Cuomo. While New York has a handful of casinos operated by native Indian tribes, the land-based operations are too few to keep New Yorkers from crossing the border to gamble in casinos of other states.

Considering that Cuomo is seeking to add revenue from casino gambling, odds are that he will also be more than willing to affix his signature to an online poker bill. However, it is first up to state lawmakers to produce enough aye votes in order that the bill finds its way to the governor’s desk.