An Iowa Senate subcommittee consisting of three panelists approved an online poker bill for the Hawkeye State despite objections from opponents that legalization would be harmful to Iowans, believing that minors would find ways to gamble online and gambling addiction among state residents would skyrocket. 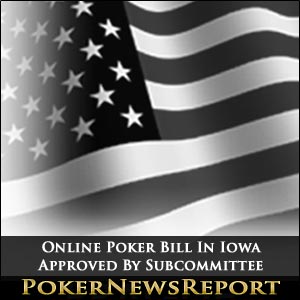 An Iowa Senate subcommittee consisting of three panelists approved an online poker bill for the Hawkeye State despite objections from opponents that legalization would be harmful to Iowans, believing that minors would find ways to gamble online and gambling addiction among state residents would skyrocket.

Iowa Senate Study Bill 3164 now makes its way to the Senate State Government Committee and is reportedly on a fast track for discussion and debate, as Senate committee members are expected to consider the measure in a matter of days. With Nevada leading the way by already accepting applications for existing casino companies located within the state to provide online poker to Nevada residents, an approval by Iowa lawmakers this week would put Iowa just slightly behind the Silver State in the race to be the first state to regulate online poker.

Citing the dangers of gambling and the belief that online poker legislation would eventually lead to all forms of online gambling being available to Iowa residents at their fingertips via the advancing technology of mobile devices being used for internet wagering, opposition to the Iowa bill is substantial, the Quad-City Times reported.

“This is just the beginning,” said Danny Carroll, a former state legislator, now affiliated with the Family Leader organization that aims to protect Iowa families. “The people of Iowa do not want it,” he added, alluding to state polls indicating an anti-gambling stance by many state residents.

Iowa State senator Jeff Danielson (D-Cedar Falls) is proposing the bill that would bring an estimated $3 to $13 million to the state in tax revenue based on a recent study that found that internet poker in Iowa would generate an expected $13 to $60 million annually. Danielson was prompted to move on his proposal by the U.S. Department of Justice’s ruling issued in December that found that the 1961 Wire Act is applicable only to wagering on sports.

“Because of the DoJ’s opinion, we believe you’ll see very quickly multi-state compacts,” Danielson said. “We believe by the end of this year you will see a handful of states continue to authorize it [online poker legislation].”

Danielson’s legislation calls for establishing an online poker network and providing a structure of regulations to implement and tax its operation. The measure would first permit intrastate wagering, followed by interstate and worldwide arrangements. Casinos licensed by the state would operate the online sites with allowances made for partnerships with hub operators controlled by the Iowa Racing and Gaming Commission. Players must be at least 21 years of age and within state borders to log on and play.

The Iowa Gaming Association, like many poker players and lobbying groups such as Poker Players Alliance and the American Gaming Association, prefer federal legislation to address internet poker on a national level. But with the diminishing likelihood of that happening in an election year, it is apparent that states such as Iowa and Nevada will continue to move forward with their own online poker regulations,