Residents of Hawaii won’t be saying Aloha to online poker anytime soon, as the latest proposed bill to allow Internet gambling is now considered dead in the Pineapple State. 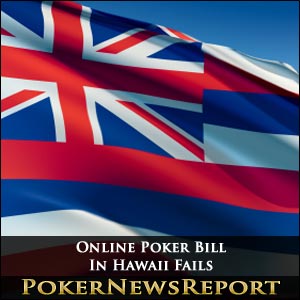 Residents of Hawaii won’t be saying Aloha to online poker anytime soon, as the latest proposed bill to allow Internet gambling is now considered dead in the Pineapple State.

As one of only two states without any type of gambling available to its citizenry, Hawaiian lawmakers actually proposed several bills in January to allow for the legalization of lotteries, land-based casinos and online poker and gambling. Each one of the measures will not be advancing, leaving Hawaii and Utah as the only states in America where gambling of any form is illegal.

However, all hope is not yet lost for the Aloha State. In early March, the introduction of proposals to research how a casino on the island of Waikiki would affect the region are being considered. Rep. Angus L.K. McKelvey, who supports online poker in Hawaii, recently mentioned to Card Player that the research is intended to study the ramifications of a land-based casino, but any legislation can be modified to include online poker and gambling also.

Since achieving statehood in 1959, lawmakers have considered regulated gambling in Hawaii dozens of times, with estimates listing the number at over 150 in the last 30 years. Prior to the latest failure, the most recent attempt was April of last year.

“Those opposed to legalized gambling argue that all forms of gaming are ‘immoral’ and will lead to an increase in crime, addiction, and the breakdown of families and communities,” a recent study stated.

Hawaii joins Mississippi and Iowa as states who recently proposed online poker and gambling regulations, but failed to garner legislative support. New Jersey and California both have active bills pending, as those states are aiming to join Nevada in bringing online poker to the United States.

According to the latest census, Hawaii has only 1,374,810 residents, ranking 39th among the 50 states in population. It is the only state comprised entirely of islands. It’s interesting to note that people born in Hawaii have the longest average lifespan of all 50 states at 79.8 years.