With a half-month left in California’s legislative session, the proposed online poker bill may land in the muck due to lack of agreement among gaming interests. 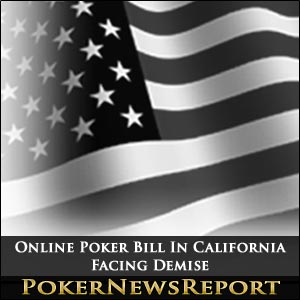 With a half-month left in California’s legislative session, the proposed online poker bill may land in the muck due to lack of agreement among gaming interests.

A major culprit in the bill’s probable failure in advancing are the Indian tribes who still can’t seem to agree on whether online poker will benefit or harm the existing revenue stream of their land-based casinos. Some tribes support Sen. Roderick Wright’s proposal to legalize poker in the country’s largest state. Other tribes are in favor of the concept, but are still pushing for amendments to the legislation as its currently written. While yet another faction of tribal groups are in total opposition to the idea.

It doesn’t look good, Sen. Wright (D-Inglewood) said to the Press-Enterprise of the prospects of SB 1463 garnering approval before the fast-approaching Aug. 31 deadline.

Its been nearly three years that Golden State cardrooms and certain Indian tribes have been actively lobbying for regulated online poker. Hundreds of hours of negotiations and public hearings have been devoted to the issue, yet there has never been a legislative vote on Internet gambling in all that time. Wright pulled the bill from the agenda of a committee hearing two months ago because it didn’t have the support to succeed. He and the bill’s co-sponsor, Senate President Pro Tem Darrell Steinberg (D-Sacramento), have met with various members of the state’s gaming interests since then and have made several amendments and revisions, but pleasing everyone involved appears to be a daunting task.

I’m not going to break a pick on this issue, Steinberg said last week, but I’m willing to see it through if there is a little more consensus.

Following Steinberg’s comments, the California Online Poker Association (COPA), which is made up of 29 tribes and 31 cardrooms throughout the state, presented several amendments they would like to see on SB 1463. Ryan Hightower, a COPA spokesman, said that California cannot afford to give up 1,300 jobs and $1.4 billion in new revenue over the next ten years by further delaying online poker legislation.

Chief among COPA’s desires is changing the term of licensing from five to ten years and excluding horse-racing tracks and advanced-deposit wagering (ADW) providers from being allowed to offer online poker. However ADW providers would be able to provide technology to license holders.

As the in-fighting continues among tribal factions, cardrooms and horse-racing interests, time is running out in the current legislative session. If September arrives without an approval of the online poker measure, it will be back to the drawing board in 2013. With billions of dollars at stake and everyone wanting a piece of the action–except for those who mistakenly believe that online poker will hurt land-based casino revenue–it is looking more likely that SB 1463 will wind up being mucked.

This issue is too important to rush through at the close of the legislative session, said Jeff L. Grubbe, chairman of the Agua Caliente tribe.

One Reply to “Online Poker Bill In California Facing Demise”