California lawmakers will re-introduce an amended online poker bill before a Senate committee that has been restructured to appease tribal gaming interests and card rooms. 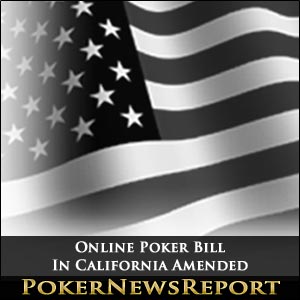 California lawmakers will re-introduce an amended online poker bill before a Senate committee on June 12 that has been restructured to appease tribal gaming interests and card rooms who voiced strong opposition to certain provisions in the original proposal.

SB1463 has been amended by co-sponsors Sen. Darrell Steinberg and Sen. Roderick Wright to limit license applicants to existing card rooms and casinos that already offer live poker, remove a provision that would have allowed online casino games to be phased in after a two-year period, and changed the duration of the online poker license to five years instead of the original ten.

Several powerful tribes and tribal associations, including the California Tribal Business Alliance and the Pechanga Band of Luiseno Mission Indians, wrote to their state senators in April to express displeasure with certain particulars of the original bill. The authors of the bill acquiesced to the requests of the tribal interests by making the aforementioned amendments, as well as removing a clause that would have required tribes to waive sovereignty rights to hold a coveted online poker license. The Indian tribes now have to waive their sovereignty only during the application process.

In addition, applicants must be in “good standing” for three years with the California Gambling Control Commission (CGCC). The license fee will remain $30 million as in the original proposal, but can be renegotiated after five years. Also, that hefty fee is for five years, as opposed to three as the measure was previously written. The CGCC will be in charge of issuing the online poker licenses, not the state’s Department of Justice.

License applicants are allowed to create new subsidiaries and enter into partnership agreements with other gambling entities who are not bound by the three-year good standing provision. That clause paves the way for companies like Bwin.party, operators of Party Poker, to enter into joint ventures in the Golden State. Bwin.party has already done that by partnering up with California’s United Auburn Indian Community to offer its online poker services to California residents and get a foot hold in the U.S. online poker marketplace. The amended bill has set no restrictions on the number of [geolink href=”https://www.pokernewsreport.com/us-poker-sites”]internet poker sites[/geolink] that may be operated by licensees.