Online Poker Banned in Cyprus amid Violence and Controversy

Cypriot legislators have voted to ban online poker as a knee-jerk reaction to illegal street gambling at the expense of bona fide i-gaming business. 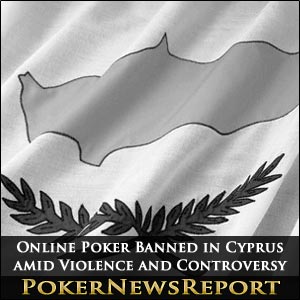 Cypriot legislators have voted to ban online poker as a knee-jerk reaction to illegal street gambling at the expense of bona fide i-gaming business.

Earlier this week, the Cypriot House of Representatives passed legislation to legalise sports betting in Cyprus but ban most other online gambling activities – including exchange betting, casino games and online poker. The move mirrors the legislation introduced in Portugal ten years ago which was intended to reduce gambling-associated crime and has received approval from the EU despite being in contravention of EU free trade laws.

However, although the introduction of regulated sports betting will generate a limited income to the cash-starved nation which has suffered from the economic downturn in Greece, the new laws have been interpreted as uneducated, unfair and irresponsible – with the government accused of washing its hands of any responsibility for lawlessness connected to illegal gambling in Cyprus.

The Background to the Ban

The Cyprus online gaming market is relatively small, but much of it is controlled by unlicensed betting operations which mostly host online casino games in neighbourhood shops. It has been claimed by opponents to online gambling that the shops are run by “mobs”, and that theses mobs use the shops as a channel to launder money from other illegal activities. It has also been suggested – but not proven – that proprietors of these establishments engage in violence to gain control of larger areas and generate more revenue for themselves.

The Cypriot press has fuelled the negative public perception of online gambling by publishing stories of innocent people getting into debt after being “coerced” into gambling in these establishments, raising public awareness of an alleged growing problem in Cyprus with reports of brutal murders (four security guards who worked for Famagusta betting shop owner Fanos Kalopsidiotis were recently killed) and giving prominence in their papers to the arson attacks on Greek-owned OPAP betting outlets which have been excluded from the legislation.

One of the companies complaining the loudest about the new regulations is online poker operator Betfair. Betfair´s online poker and exchange betting operations in Cyprus account for 4 percent of the company´s turnover and the company are contemplating whether it should appeal to the European Court over the new laws after being told it would be allowed to continue operations in Cyprus and then having permission denied.

Betfair, and a number of other online poker operators, may have a viable claim as OPAP – who only received their exemption because they run the Cypriot state lottery – do not qualify for exclusion from the new regulations under Articles 49 and 56 of the European Union Treaty relating to cross-border business operations which state that Member States can restrict private operators’ rights to offer gambling services across borders within the EU, often in favour of the incumbent monopoly, as long as their actions are “legitimate and proportionate” and can be consistently justified in terms of providing better protection for players from crime, fraud and addiction.

After the new laws were announced, House Legal Affairs Committee chairman Ionas Nicolau was quoted as saying From this day we are handing over to the prosecuting authorities and the state the tools to combat this phenomenon. However Justice Minister Loucas Louca came under attack after plans were leaked for police to be stationed outside of all 168 OPAP lottery and i-gaming shops following threats of further actions against the Greek-owned outlets.

These are operational matters, he told the Cyprus Mail. But measures are definitely being taken, this is no secret. The minister was dismissive of concerns over taxpayers’ money being spent on protecting a private company – an irresponsible attitude according to some observers considering the Government´s refusal to allow online poker in Cyprus.