Almost $33 million has been spent, but the lobbying groups are in disagreement over whether online poker should be regulated at the state or federal level. 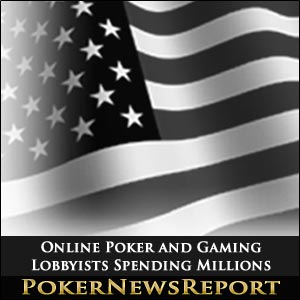 Almost $33 million has been spent by lobbyists in payments and political donations in 2011 by varied interest groups that are looking for a slice of the profits to be had from online gaming, but the lobbying groups are in disagreement over whether online poker should be regulated at the state or federal level.

Rep. Mary Bono Mack (R-CA), chairman of the House Subcommittee on Commerce, Manufacturing, and Trade, which has jurisdiction on the internet gambling issue and has already held two hearings on the matter, said that the big money lobbying campaigns are hard to miss as each group presses to have their interests or messages heard.

“Increased lobbying brings the issue to the forefront of what the members are paying attention to,” Bono Mack said, pointing out that online poker supporters have made their feelings known with a large number of posts on her Twitter account and Facebook page.

In the lobbying battle between federal and state regulation lobbyists, one of the biggest spenders in the game revealed which side of the fence they were on. “We prefer federal legislation,” said Poker Players Alliance (PPA) Executive Director John Pappas. Since the beginning of the year, the PPA has doled out over $1 million to send 20 lobbyists to Washington in an effort to garner support for federal regulations to legalize internet poker.

Although admitting that lobbyists can be a powerful force in getting a group’s message across, Pappas also feels that the efforts made by online poker players themselves who are PPA members also has considerable value that can sometimes be as effective as traditional lobbying efforts to persuade and influence lawmakers.

“We’ve had tens of thousands of letters sent to Capitol Hill, hundreds of personal visits by individual poker players who care about this issue,” Pappas said. “Lobbyists are just a bunch of suits. Our 1.2 million members are really the heart and soul of our organization.”

One factor that may presently be standing in the way of state-regulated gaming is the Unlawful Internet Gambling Enforcement Act (UIGEA) of 2006, which prohibits financial institutions or companies from conducting monetary transactions involving internet gaming. Whether the UIGEA permits individual states to provide and run their own online gambling systems is still being debated by lawmakers

Two proposed federal bills, one to regulate online poker and the other aimed at legalizing all forms of internet gambling, are now pending before Congress. Las Vegas casinos are also pushing for federal legislation to be enacted as opposed to state regulations.

“There are large gaming companies and large technology companies that are working for a federal bill,” said Sanford I. Millar, a Los Angeles-based attorney who represents clients in the internet gaming industry. “Working against those interests at the federal level are significant separate state interests, such as tribes, card clubs and racetracks,” Millar added. “Each of them has a separate and distinct business model they’re trying to protect.”

Tribal gaming interests have spent over $11 million in lobbying efforts this year. Most are opposed to federal legislation that could take away their regular casino customers. Many fear that Indian tribes would not be able to go up against land-based casinos in an online market and that their lucrative casino profits would suffer as a result. But some tribes are better-suited than others to provide and benefit from online poker.

“To be sure, 100 percent of the tribes would face new competition with the authorization of online gambling, while only a few would have the financial strength to compete with those who are granted new online gaming franchises,” Morongo Chairman Robert Martin said recently.

“The tribes have various viewpoints,” Bono Mack said. “and they’re all valid.” During the subcommittee hearing, Bono Mack alluded to the prominent role that Indian gaming plays in her constituency, a sign that may signal that she is leaning toward a state-regulated approach to online poker legislation in an effort to appease the tribes: “In my own Congressional District, tribal gaming has been a huge plus, with seven casinos supporting thousands of jobs during these difficult economic times. The tribes have been great neighbors too, contributing regularly to charities and civic events.”

“We have the exclusive in that space now,” said John Rubinstein, vice president for development at Del Mar Thoroughbred Club. “If there is an expansion in internet wagering, we want to make sure we’re involved and continue to prosper.”

As it stands now, 48 states and the District of Columbia permit some type of gambling, whether it be wagering in Atlantic City or Las Vegas, at tribal gaming casinos, or betting on horses or state lotteries. In 2010, commercial gambling tallied over $60 billion in revenue throughout the U.S. Of that total, about $26 billion went to Indian tribes, according to statistics provided by the U.S. Senate Committee on Indian Affairs.

Still remaining up for grabs is the billions of dollars that Americans are wagering annually on untaxed and unregulated offshore poker websites. And that’s the target the lobbyists are aiming for.