Online Poker And Gambling Approved By Senate In Delaware

Delaware is poised to join Nevada as the only states to authorize online poker as a gambling expansion bill was approved by the State Senate. 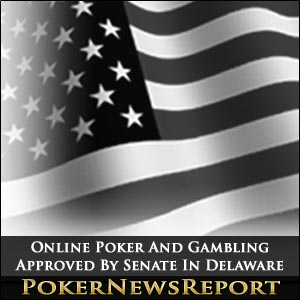 Delaware is poised to join Nevada as the only states to authorize Internet poker as a gambling expansion bill was approved by the State Senate on a vote of 14-6 with one senator abstaining.

The Delaware Gaming Competitiveness Act of 2012 needed a three-fifths majority–13 votes–to pass and move on to the desk of Gov. Jack Markell, who has indicated his support of the measure and his signing of the bill into law appears to be a mere formality. The bill calls for online gambling to be controlled by the Delaware Lottery. In addition to the online offerings, keno will be permitted in more than 100 land-based locations, and NFL betting will expand to more than 20 non-casino locales.

Voting on the bill was delayed by one day when it was determined that the official vote would just miss passing, with unofficial tabulations at 12-6 with two abstentions among voting senators in attendance. By prolonging the vote by one day, supporters of the bill made sure that another “aye” vote was present and were also able to sway one undecided senator into approving the legislation that will allow Delaware to better compete with neighboring states such as Maryland and Pennsylvania, who have previously expanded their land-based casino offerings, swiping some of Delaware’s revenue in the process.

Delaware has only 900,000 residents, of which its been estimated that just a few thousand had previously played online poker. But the number of players is expected to increase in a fully-regulated online gambling site to somewhere in the range of 20,000-30,000. Rumors abound that the First State is seeking interstate partnership deals with Rhode Island and West Virginia in an online poker triumvirate to increase liquidity.