Lock Poker´s ISPT online Day 1A was postponed last night, after only two players registered for the first of the site´s six Day 1 Wembley qualifiers. 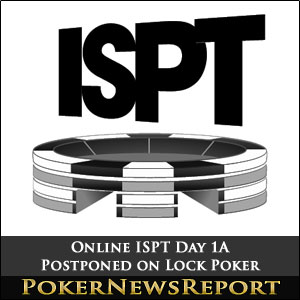 Lock Poker´s ISPT online Day 1A was postponed last night, after only two players registered for the first of the site´s six Day 1 Wembley qualifiers.

After last week´s disappointing turn-out for the first of the French-players-only online ISPT Day 1 tournaments on MyPok.fr, organisers of the biggest poker event ever organised took another kick in the teeth as Lock Poker postponed its first Day 1 due to a lack of interest.

While more than one thousand players competed in the $100K guaranteed feature event running at the same time on the site, only two players registered for the $400 + $20 buy-in ISPT Day 1A – leaving Lock Poker with no option but to cancel the tournament and re-schedule it for next weekend.

Poker770 Cancel Their Satellites Too

With just one week to go until the first of the ISPT online Day 1s are scheduled to be played on Poker770.com, the iPoker network site also appears to have difficulty in generating interest in the International Stadiums Poker Tour.

Both of the Sunday´s satellite tournaments to Poker770´s Day 1A next Sunday were cancelled (again) – the €2.20 re-buy tournament failing to reach its minimum entry of 30 players, while the €11.00 freezeout scheduled for one hour later was cancelled when nobody bothered to register at all!

Yet again after a major setback to their plans, there was no comment from organisers of the International Stadiums Poker Tour. After a week of hammering Twitter, Facebook and other avenues of social media, the silence from ISPT headquarters was almost deafening.

With only thirteen players so far guaranteed a seat on Wembley´s hallowed turf come June, those behind promoting the ISPT may have to think of re-introducing the guarantee that never was and biting the bullet if they fail to get the required amount of entries.

Ambassadors to the Rescue? Don´t Count on it!

While Lock Poker were struggling to reach the six players they needed to start the online ISPT Day 1A, their latest pro signing and primary ISPT ambassador Michael “The Grinder” Mizrachi was cleaning up in the WSOP Africa Main Event.

On his way over to the Emerald Resort and Casino, Mizrachi inadvertently tweeted the wrong day for the Lock Poker ISPT online Day 1A to his followers. Although his mistake probably made little difference to the disappointing turn out for the event, his error only increases the poker public´s view that the International Stadiums Poker Tour lacks credibility.

Incredibly, the video in which Mizrachi promotes the ISPT as having expected … at least … almost … thirty thousand players playing for 20 million dollars(!) still appears prominently on the ISPT web site.