The witnesses invited to provide testimony at Thursday’s online gambling Senate hearing pertaining to tribal interests has been released by committee members. 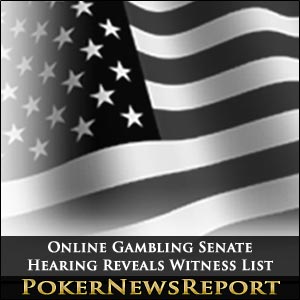 The witnesses invited to provide testimony at Thursday’s online gambling Senate hearing pertaining to tribal interests has been released by committee members.

Porter is a lobbyist for the Poker Players Alliance and is the only invited speaker who is not a tribal representative. Both “Two Dogs” Bozsum and Gobin have provided testimony before the committee previously at the first hearing held in November of last year. A second Indian Affairs meeting was held in February of 2012.

Industry scuttlebutt has it that Indian tribes would like to draft their own online poker and gambling legislation and may discuss that desire at the hearing set for 2:15 pm in Room 628 of the Senate Dirksen Building. The pow-wow will be broadcast live over the Internet and is available on the government website.

A federal Internet poker bill is being authored by Senators Jon Kyl (R-AZ) and Harry Reid (D-NV), but is believed to be lacking support from Republican senators. Reid recently said that he and Kyl have “worked very hard” in drafting legislation, but that positive feedback from GOP senators “hasn’t been forthcoming yet.” A bill actually written and proposed by tribal gaming interests would be hard-pressed to ever pass, but may go a long way in clarifying what the native tribes would like to see by way of regulations.