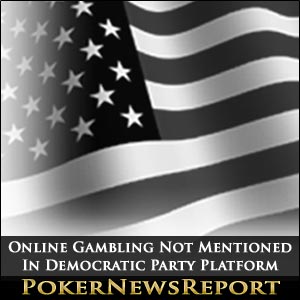 The Democratic National Convention began Tuesday in Charlotte, North Carolina and party members showed their support of “Moving America Forward,” the party’s 70-page platform that is “a declaration of [Democrats] plan to move America forward over the next four years and beyond.” Online gambling activists were anxious to see the stance taken by Democrats on the issue of Internet gambling legalization, but no mention was made either supporting or denouncing federal regulations.

The word Internet was found in the platform 12 times and a plank entitled “Internet Freedom” did make mention of the promise to provide Americans with the Internet’s availability. But any reference to using the Internet for means in which to gamble was notably omitted. The Poker Players Alliance (PPA) felt that the Democrats could have won over many voters had they had the foresight to include the support of online poker legislation in the platform.

While clearly far better than advocacy for a ban, I think they missed a golden opportunity to reach out to America’s poker players and supporters in what is sure to be a very close election

The PPA and other online poker proponents are certainly disappointed that the Democratic Party platform remained mum on the controversial issue. However, the silence is consistent with a statement in May emanating from the White House that said online gambling legislation is a matter to be decided by each individual state. And while the campaigns of both parties continue, so will intrastate online poker. In the absence of federal regulations, states are expected to continue progressing with legislation of their own. Nevada is leading the way and is anticipating having a site up and running as early as October.