Online Gambling Not Allowed in Oklahoma

Two Oklahoma tribes operating an online gambling website had to shut the site down when informed that state statutes do not permit Internet gambling. 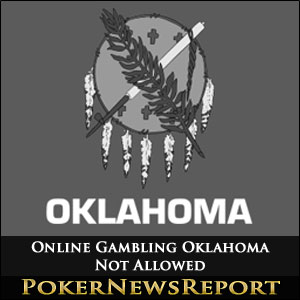 Two Oklahoma tribes operating an online gambling website had to shut the site down when informed that state statutes do not permit Internet gambling.

The Arapaho and Cheyenne tribes had been running a free-play site for several months under the belief that the existing tribal-state compact allowed them to do so. Representatives from Oklahoma Governor Mary Fallin’s office instructed the tribes that such online gaming operations are not allowed in the Sooner State under the current agreement.

The tribes took the site down last Friday after reaching a compromise with state officials. The website will be allowed to be offered internationally by the tribes, but it must be located outside of U.S. borders. The tribes will also have to pay certain fees to the state for the privilege of operating the website.

An attorney for Gov. Fallin, Steve Mullins, called the situation a misunderstanding that was resolved amicably when both parties sat down at the table and worked out an agreement. Mullins added that Internet gaming is improper in Oklahoma and the state has no plans to expand its existing gaming laws to include online gambling, newsOK.com reported.

A spokeswoman for the Arapaho and Cheyenne tribes, Lisa Liebl, stated that the social gaming website will be online again very shortly and be available to players worldwide, excluding the U.S.

Oklahoma officials were not interested in assessing fines or penalties against the tribes for violating the compact, as the tribes sincerely believed that they were operating in accordance with the existing agreement.

Many states are looking at online gambling legislation as a way to increase revenue. However, a smattering of states seem dead-set against it. Utah enacted legislation last year opting out of any federal online gambling regime. The state of Washington has had a law on the books since 2006 that makes playing online poker a felony. New Mexico legislators recently proposed a ban on online gambling in order to protect the revenue generated by the Navajo tribe’s brick and mortar operation. And it appears as though Oklahoma lawmakers will also not be embracing Internet gambling anytime soon.