Gamblers in New Jersey will likely have a new reason to be grateful during the Thanksgiving holiday season in November. 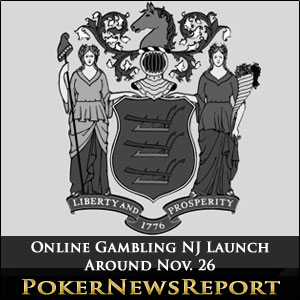 Gamblers in New Jersey will likely have a new reason to be grateful during the Thanksgiving holiday season in November.

Gaming officials in the Garden State have reportedly set Nov. 26, 2013 as the day that online gambling will kick-off. That’s two days before Thanksgiving, meaning that New Jersey residents will be able to enjoy online poker and gambling in addition to watching NFL football and eating turkey during the traditional American holiday.

Borgata Hotel Casino & Spa anticipates being among the first in the state to offer games online. The Atlantic City brick and mortar is busily preparing for an online launch and intends to be ready once regulators give the green light, the Press of Atlantic City reported.

The casino’s parent company, Boyd Gaming, revealed the company’s plans to lead the way in the state’s Internet gaming scheme while on a conference call with analysts that focused on first quarter earnings. Those earnings were down 6% in comparison with Q1 figures from 2012. However, Borgata was still able to outperform all other Atlantic City casinos so far this year.

The company is counting on online gambling revenue to boost profits and firmly believes that its Internet offerings will complement its land-based operation. Online poker, in particular, may cause more players to visit casinos after winning online satellites that allow for competition in live events.

Borgata is operated as a joint venture by Boyd and MGM Resorts International. An Internet gaming provider has not yet been announced. However, Boyd and MGM have already collaborated with bwin.party digital entertainment to run online poker for real money in Nevada and all indications are that that partnership will expand to New Jersey.

Conflicting reports have been released estimating how lucrative online gambling may be in the Garden State. The state treasurer believes that the first year of operation could see $1.2 billion generated in online gambling, resulting in tax revenues of $180 million for the state. But a study by Econsult Corporation in Philadelphia pegged first-year gross revenue estimates to be roughly six times less than that amount at somewhere in the middle of $210 million and $250 million.