Online Gambling In Maryland Gets Mucked

A proposal to expand gambling in Maryland to keep up with expansion in neighboring states such as Delaware will not include online gambling. 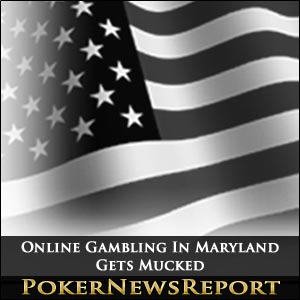 A proposal to expand gambling in Maryland to keep up with expansion in neighboring states such as Delaware will not include online gambling.

Gov. Martin O’Malley has called a special legislative session this week for Maryland lawmakers to discuss adding table games to the state’s existing slots casinos and the possibility of approving a sixth casino to be erected in Prince George’s County. The agenda was initially believed to include online gambling as another topic of discussion based on a memo that House Speaker Michael E. Busch distributed to his colleagues. But Busch’s chief of staff, Kristin F. Jones, let everyone know that Maryland legislators have folded their cards on the Internet gambling issue.

After numerous discussions, the House has decided not to include an Internet gaming component in any legislation it advances during the special session, Jones said.

The online gambling provision to a gambling expansion bill was suggested by Cordish Cos., owner of Maryland Live! Casino, who fear that a new casino in Prince George’s County will slash revenue at their casino considerably. The Cordish proposal would have given licensed casinos the ability to offer online gambling to bring in revenue that may be lost to the new casino. As it turns out, the Internet gambling idea won’t even be on the agenda for the special session scheduled to commence Thursday.

A draft of the gambling expansion bill sans online gambling is likely to be released by Gov. O’Malley late Tuesday, giving Maryland lawmakers one full day to review the proposal before convening the special session. O’Malley called the urgent session partly because neighboring Delaware recently enacted the Gaming Competitiveness Act of 2012 that expands gambling in the First State–and includes online gambling–and may poach a number of gamblers from Maryland.