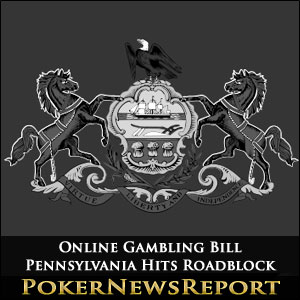 Just a couple of months ago, Pennsylvania took its first step towards legalizing online gambling. On April 25th, Rep. Tina Davis introduced a bill that would allow casinos operating within the state to host online games, including poker. Since legalizing table games and poker in its live casinos a few years back, Pennsylvania casinos have become a haven for those not quite willing to travel to Atlantic City, Foxwoods or Mohegan Sun. If anything, players from both New York and Philadelphia have been flocking to PA casinos in droves. Thus, it would only make sense that the state explore its online option.

Other states in the vicinity, including neighboring New Jersey and Delaware have already approved online gambling for 2013, with New Jersey hoping to have its operation up and running by the late fall. It is estimated that online gambling will raise an additional $110 million dollars in annual revenue for the Garden State.

Unfortunately, the Pennsylvania bill has hit a bit of a snag. Representative Tina Pickett, who also runs the Gaming Oversight Committee in the House, has gone on record stating that Pennsylvania is going to take a wait-and-see stance over legislation related to online gambling. What this means is that proponents of the bill, entitled H.B 1235, are likely going to have to wait until at least 2015 before the bill is presided over by the House. Not yet comfortable with introducing online gaming to households, Pickett would rather see the effect it has on neighboring states firsts.

In other words, she wants New Jersey and Delaware to act as guinea pigs. If the bill passed in other states effects Pennsylvania in a negative way, then she will likely reopen discussions. If not, then Pennsylvania may never legalize online gambling.

There are other deterrents as well. The bill projects a tax rate of more than 20 percent – far more than those proposed by other states. It is believed that most casual gamblers will not be keen on paying such an inflated rate, and will likely take their business elsewhere or opt out of playing online altogether.

Looks like it will be some time before the average Pennsylvania citizen will be check-raising fish. Too bad.

One Reply to “Online Gambling Bill in Pennsylvania Hits Roadblock”