A proposal to regulate Internet gambling in New Jersey advanced on a 6-0 vote by the Assembly Budget and Appropriations Committee. 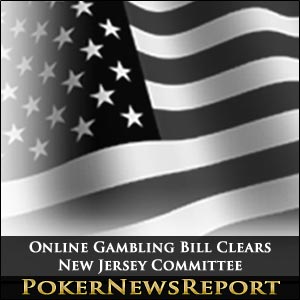 A proposal to regulate Internet gambling in New Jersey advanced on a 6-0 vote by the Assembly Budget and Appropriations Committee and will now head to the full Assembly for another vote.

However, that vote may not take place until after the summer because of Gov. Chris Christie’s wavering stance on the issue and his desire to delay the matter. Indications are that the Garden State governor is holding up progress on Internet gambling until after the presidential election in November. Rumors have circulated that Christie may be in line to run alongside Republican presidential hopeful Mitt Romney as a vice-presidential candidate.

Sen. Raymond Lesniak, who sponsored a companion online gambling bill that is currently before the Senate, recently said that the governor has signaled that he wants to wait until the fall to act on this. Just a couple months ago, many believed that New Jersey would compete with Nevada in the race to be first in offering online poker on an intrastate basis. But that won’t happen as long as Christie does not fully commit to the matter, as Nevada has already done. The Silver State is currently reviewing license applicants and will soon be officially granting the first online poker licenses in the state’s history.

Brick and mortar gambling expansion of New Jersey’s neighboring states of Pennsylvania, Maryland and Delaware has cut into profits of Atlantic City casinos, causing Garden State lawmakers such as Lesniak to seek additional revenue via online gambling formats. But legislators can only do so much with Christie stalling the progress of Internet gambling measures. He vetoed a bill to regulate online gambling in 2011, changed his mind in early 2012 and said he was in favor of Atlantic City casinos to offer online gambling, and is now skirting the issue until later this year.