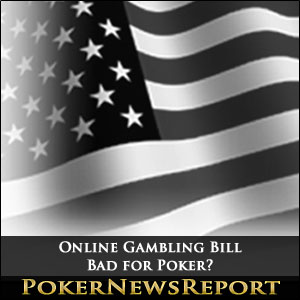 King’s proposal, the Internet Gambling Regulation, Enforcement, and Consumer Protection Act of 2013, allows for online poker and casino games such as slots, roulette and blackjack. It does not include sports betting. But the bill is much more broad than recent legislative efforts that focused on permitting online poker while strengthening laws against other casino games.

Although online poker bills in past years such as those proposed by Rep. Joe Barton and the joint effort of Senators Harry Reid and Jon Kyl failed to garner enough support, they did get Congressmen discussing the prospects of poker-only legislation. Citing poker’s renown for requiring more skill than luck in achieving profitability over time, it would be much more likely to eventually persuade lawmakers opposed to a broad spectrum of online gambling to some day change their tune and permit only online poker.

Attempting to get those same legislators who are opposed to gambling to make a complete about-face and allow practically all forms of online gambling instead of poker-only seems a bit of a stretch at this point. And many insiders believe that it may end up doing harm to the little progress that has been made for federal online poker legislation thus far.

While many poker players enjoy dabbling in wagering on other casino games recreationally from time-to-time, most are fully aware that the house edge in such games is too great to overcome and achieve success and profitability over the long haul. Not so with poker, where a player’s skill level is most often the deciding factor in winning or losing over time. It is for this reason that online poker legislation should not be lumped in together with other casino games.

While previous online poker bills saw the logic in that, King’s seemingly does not. And although King’s proposal does a good job of including casinos, racetracks, Indian tribes and state lotteries on equal footing to operate gaming sites, it may be all for naught after the anti-gambling proponents come out in droves to say that allowing almost all forms of Internet gambling is too much.

A majority of poker players care much more about online poker than other forms of gambling. Many couldn’t care less about blackjack and slots. But King’s bill may cause federal online poker-only legislation to take a step back instead of moving forward. And with more states enacting their own online poker and gambling regimes, time may eventually run out on any federal plan.