Ongame Network May Be Sold And Reshuffled

Although no formal announcement has been made, industry rumors heating up the online poker forums include talk of the Ongame Network being sold to slot machine manufacturer Shuffle Master for the sum of €16 million. 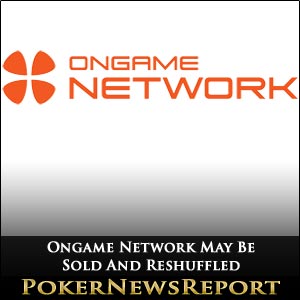 Although no formal announcement has been made, industry rumors heating up the online poker forums include talk of the Ongame Network being sold to slot machine manufacturer Shuffle Master for the sum of €16 million.

The Ongame Network, consisting of about 25 skins including BetSafe, Hollywood Poker, Bwin and BetFair, had been on the block for the last year or so by owner Bwin.party, the entity made up of the merger between PartyGaming and Bwin. Industry analysts believe that Bwin players will be reshuffled onto the Party Poker Network before the sale is formalized. This would seriously reduce player traffic on the Ongame Network and boost liquidity at Party Poker.

Shuffle Master is based in Las Vegas and is one of 13 current applicants vying for an online poker license to provide services to Nevada residents as the first state to legalize internet poker on a state-by-state framework. The maker of both live and electronic casino games, Shuffle Master reaches customers worldwide with business locations in Macau, Australia, South Africa and Austria.

The Ongame Network’s original purchase price was €473 million in 2005 prior to the enactment of the Unlawful Internet Gambling Enforcement Act (UIGEA) of 2006, which prompted a number of poker rooms to pull out of the U.S. market. One of those poker rooms, Party Poker, was the leading online poker site in terms of player traffic before ceding its ranking on advice from company attorneys. PokerStars elected to remain in the U.S. market, subsequently taking over the position as the world’s top poker room. However, PokerStars was included in the Black Friday allegations that seized the domains of the top three poker sites at the time who seemingly were not concerned about possible ramifications resulting from violating the UIGEA. Those ramifications include Full Tilt eventually being shut down and Absolute Poker apparently nearing asset liquidation.

Ongame targets the European market and currently ranks sixth in player traffic. Another applicant for a Nevada online poker license, IGT, purchased the Entraction Network, a rival of Ongame, for $115 million in March of 2011. It has since rebranded Entraction as the the IGT Poker Network.

Other online poker network scuttlebutt making the rounds has the iPoker Network splitting up to form two separate networks. Ranking third in player traffic, iPoker consists of more than 40 skins, including William Hill, BetFred, Titan Poker and Paddy Power Poker. Rumors abound that the larger and more influential skins on the Playtech-run iPoker would like to disassociate themselves from the smaller skins, which would also effect player liquidity on the network.