One Week until Start of Super XL Series at 888Poker

With their being no shortage of tournament series around right now, a timely reminder that 888Poker´s Super XL Series gets underway next weekend. 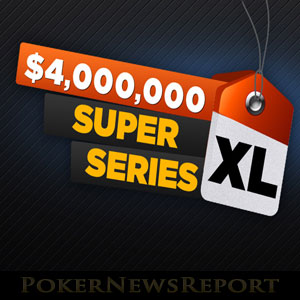 With their being no shortage of tournament series around right now, a timely reminder that 888Poker´s Super XL Series gets underway next weekend.

It is a busy time for players into their big online poker tournament festivals. High rollers have PokerStars´ WCOOP and Americas Cardroom´s BOSS series to amuse themselves, while players with more modest bankrolls can participate in the flyweight and lightweight divisions of Party Poker´s PowerFest, or the Universal Championship of Poker over at PKR Poker.

With all this online action taking place at the same time, it might have slipped some players´ minds that 888Poker´s Super XL Series gets underway next weekend. Furthermore, while many players are distracted by the feature events in the current series, there will likely be some excellent value available this weekend in 888Poker´s satellite schedule.

About the Super XL Series

This will be the sixth time that [geolink href=”https://www.pokernewsreport.com/888-poker”]888Poker[/geolink] has hosted a Super XL Series – each one being bigger and better than the last. Due to the fourth series (in January 2016) surpassing its guarantees by an average of 210%, and the fifth series Main Event (in May 2016) smashing its $1.2 million guarantee, the combined guaranteed prize pools for Super XL Series VI will be more than $4 million.

The forty-event series gets underway next Saturday (September 17) with two Crazy 8 Super XL Kickoff Tournaments – one with an $88.00 buy-in, the other a “mini” version with an $8.80 buy-in. The two tournaments have guarantees of $100,000 and $10,000 respectively, and follow the format of the Crazy Eights tournament that was played this year at the World Series of Poker.

Other highlights during the nine days of action include:

Plenty of Satellites Running for the Super XL Series

Despite the big jump in the prize money guaranteed for the Super XL Series VI (up $1 million since May), it is not expected there will be many undersubscribed tournaments offering players the chance of an overlay. Where players are likely to find a little value is in 888Poker´s satellite schedule – especially while big tournament series are underway elsewhere.

The satellite path for many of the events starts at just $0.01, with players having the option to choose where the path leads them – either take a tournament ticket of a certain value or continue on the satellite path to win a tournament ticket of a higher value. More direct methods of qualification are scheduled for tonight (Friday), Saturday and Sunday, when three “Main” Main Event satellites take place, with $750 in consolation prizes for those who do not win a seat in the target event.

Players should also keep an eye open for qualifiers to the 50 seat Main Event Mega-Satellite on Sunday 25 September. The Mega-Satellite event has a direct buy-in of $215, and will need 250 entries to cover its prize. We reckon this tournament is one of the most likely to be undersubscribed and one of the best opportunities for players to extract some value from 888Poker´s Super XL Series.