OMG! Daniel Colman is on a sick heater

Over the last seven months, reserved high roller who caused a lot of stir at the Big One for One Drop, Daniel Colman won almost $22 million. 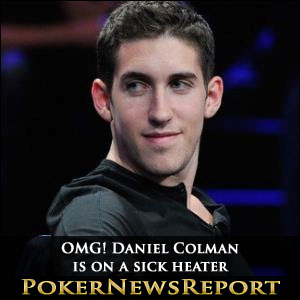 Over the last seven months, reserved high roller who caused a lot of stir at the Big One for One Drop, Daniel Colman won almost $22 million.

Last week, PokerNewsReport talked in depth about one of the most memorable Sundays in the history of online poker. Of course, there were some members of the community that thought Pablo Gordilo’s big day was in fact a marketing move made to show the world that everything is possible in poker. They even went further talking about rigged RNGs and flawed software. But what happened in the last several months, on the live green felt, contradicts their opinions indicating that indeed everything IS possible, no matter the RNG, no matter the casino, and no matter the dealer.

Colman seems to have found the Holy Grail of poker and now he is literally unstoppable. He continues to crush the toughest live tournament games month after month, filled with big sharks like Isaac Haxton, Sam Trickett, Philipp Gruissem, Daniel Cates, Daniel Negreanu, Phil Ivey, Phil Galfond and many others.

His incredible run started in April, when he won the EPT Season X Grand Final Super High Roller for a total of over $2 million. Two months later, he picked up where he left off in Las Vegas and came close to win the $10,000 WSOP Heads-Up event reaching the semifinals and cashing in a `tiny` six-figure prize. Tiny compared to his next prize: $15,306,668.

Colman prevailed just when the lights shone brightest, in the WSOP million-dollar buy-in tournament, The Big One for One Drop. He topped a field consisting of 42 of the best and wealthiest players in the world and took down the second largest poker prize in history. However, in spite of all the media hype, the American refused to ride the wave and chose to be silent. Not for long as he wrote on the two plus two forums about his reasons why he decided to go that road. He belittled the game stating that he wouldn’t recommend anyone to try or make it as a poker professional.

Colman though continued to make it as a pro and won some other big prizes in the process. He finished third in the Aria $100,000 Super High Roller and was the runner-up of the EPT Barcelona €50,000 SHR just almost two months ago.

Impressed? It’s not over yet. Now Colman can brag with yet another title won this morning, at Palm Beach Casino: the WPT Alpha8 London. He got past Max Altergott in the final heads-up battle to cash in almost $1 million (£600,000).

Overall, in the last seven months, the red-hot poker player won three live trophies and approximately $21,956,243 in cash prizes. Still thinking that the game is rigged?

Unfortunately for the industry, Colman is not such a good ambassador for the game. As we’ve all seen in the Big One for One Drop, the American is reserved and has no interest in promoting poker. For him, the game had a negative effect on the people playing it, both financially and emotionally. Because of his reaction, most of his latest success flew under the radar and what could very well be the best run in poker history is just a footnote in the big media.

Daniel Colman said in his post on two plus two forums. But what about the $22 million won on the live poker felt and the other millions won online (using the nickname ‘mrgr33n13’, he crushed the Heads-up Sit’n’Gos games before going live)? Aren’t these prizes a fair repayment of the countless hours spent analyzing and thinking about the game?