There is always some good fortune needed to win a World Poker Tour Main Event, but Emil Olsson enjoyed more than his fair share to take down the WPT Copenhagen. 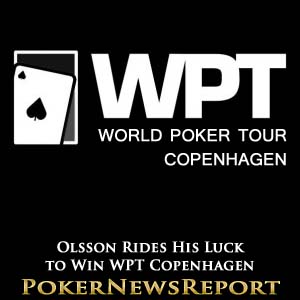 There is always some good fortune needed to win a World Poker Tour Main Event, but Emil Olsson enjoyed more than his fair share to take down the WPT Copenhagen.

The climax of the WPT Copenhagen Main Event was played with the same aggression – some would say recklessness – as the previous four days. Going into the final table, Emil Olsson and Stanislav Barshak held significant chip advantages over the remaining four players, yet it was the shortest stack of them all – Morten Klein – who almost caused a major upset.

As the six players sat down around the final table, 10 minutes remained in Level 22 (blinds 8,000/16,000 – ante 2,000). Both Olsen and Barshak were the targets for some aggressive betting by the shorter stacks, with Robin Ylitalo and Philip Jacobsen both improving their chips stacks over the 1,000,000 mark at the expense of the chip leaders.

Morten Klein also joined the millionaires club at the start of Level 23 ,when his A♥ 9♠ hit a better two pair than Ylitalo (A♣ 3♥), and the new short-stack – Jan Djerberg – was the first to leave the table after shoving with A♥ 9♦ and not able to improve his hand against Philip Jacobsen´s 10♣ 10♥.

Klein once again took a chunk out of Robin Ylitalo when his Q♦ 3♠ hit two pairs on the turn, and Ylitalo was eventually eliminated from the game in fifth when running his K♥ Q♥ into the K♣ K♠ of Stanislav Barshak.

Olsson lost another 300,000 in the next hand to Morton Klein when the Swede announced he was all-in after a flop of 10♥ 7♠ 6♥, but was able to recover some of his chips when eliminating Stanislav Barshak in fourth. Olsson moved all in on a flop of J♣ 10♥ 3♦ with Q♠ J♠ and was called by Barshak (J♦ 9♦) who also had top pair. Olsson´s better kicker survived, but his win still kept him as the short stack as play went three-handed.

Morten Klein took chips from both his opponents to take the advantage at the final table in the WPT Copenhagen Main Event. First he forced Philip Jacobsen out of a half-million chip pot with an aggressive post-flop bet and then his K♥ 3♥ hit the K♠ on the flop to best Emil Olsson´s pocket Deuces. Olsson lost more chips when laying his hand down following a post-river bet from Jacobsen in a later hand and, reduced to less than a million chips, was forced into a shove or fold policy.

After two shoves which met no opposition, it was third time lucky for Emil Olsson. Olsson pushed once again from the small blind with 4♥ 4♦ and was called by Philip Jacobsen in the big blind holding A♥ 8♥. The flop of K♥ 10♣ 2♥ made Jacobsen a 53% favourite, but Olsson´s pocket Fours held on to give him the double up. A further shove enabled Emil Olsson to pick up the blinds once again (25,000/50,000 – ante 5,000) and then Olsson and Jacobsen split a pot in which Olsson shoved once more.

And Then This Happened

Emil Olsson got all his chips into the middle once again with 4♦ 4♠. Philip Jacobsen called with 10♣ 10♠ and the Dane´s supporters on the rail went wild when the flop came down J♠ 10♦ 2♦ – making him a 96.26 percent favourite to win the hand. Incredibly, those odds were overturned by the 6♦ and 7♦ appearing on the turn and river, and Jacobsen was reduced to his last 350,000 chips – which disappeared in the next hand when he moved all-in with Q♣ 5♠ and was busted in third by Morten Klein´s A♥ K♥.

With his fortunate double-up, Emil Olsson went into the heads-up at a disadvantage of only 14 big blinds (Klein 3,780,000 chips V Olsson 3,090,000 chips) but that gap soon widened as Morten Klein applied both pre-flop and post-flop pressure. Emil Olsson chipped back up to his starting position when flopping a set of Nines, and then incredibly took the chip lead when rivering the J♣ to pair his J♥ in a million chip pot.

Another million chip pot went Olsson´s way when Morten Klein tried to bluff the chip leader with no better than Queen high (Olsson only had a turned pair of Sevens, but made the call anyway) and then Klein shoved his last 1.5 million chips into the middle of the table with K♥ 8♦ and ran into the cowboys of Emil Olsson (K♦ K♣). There were no major surprises on the flop, and Emil Olsson became the latest WPT Champion.

History will show that Emil Olsson won the WPT Copenhagen after taking a chip lead to the final table, but few will forget how Philip Jacobsen was so unlucky to be eliminated from the event and then how Morten Klein went to pieces in the heads-up. Prizes were paid out in Danish Kroner, but we have included an approximate dollar value below to indicate what the prizes were worth in real money.