Olivier Busquet and Daniel Colman played out an exciting climax to the EPT Barcelona Super High Rollers even after a split of the prize money had been agreed. 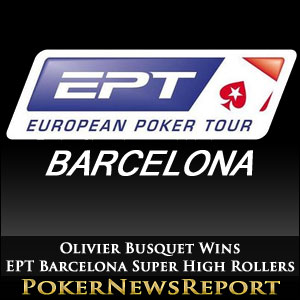 Olivier Busquet and Daniel Colman played out an exciting climax to the EPT Barcelona Super High Rollers even after a split of the prize money had been agreed.

The final table of the EPT Barcelona Super High Rollers was one of the most action-packed climaxes of any recent EPT event and was packed with dramatic double-ups, superb bluffs and players being eliminated when they had got their chips in at what seemed to be the right time. Incredibly, three players were eliminated after shoving all-in with Ace-Queen combinations!

Coming into the final table however, it would have been difficult to guess who the eventual winner would have been. Not only were the top three players closely matched in chip counts, there was a wealth of skill amongst the rest of the table – several of whom had a reputation for performing particularly well with big prize pools at stake.

The Curse of Ace-Queen Begins

With blinds of 30,000/60,000 (ante 10,000), it only took one orbit of the button before we lost the shortest stacked player coming to the final table – Mustapha Kanit. Kanit responded to a pre-flop raise by Sven Reichardt by announcing he was all-in. Kanit looked good to double up when the cards where on the backs (Kanit A♣ Q♦ -v- Reichardt A♠ 8♣), but the 8♠ in the window put Reichardt ahead in the hand, and with no Queen on the Turn or River, Mustapha Kanit was eliminated in ninth place.

Thereafter the early levels of the Super High Roller Final Table were a case of the chip lead changing hands frequently. Vladimir Troyanovsky took 270,000 chips from Morten Klein when forcing the overnight chip leader out of a big pot, but then Klein returned the favour against Troyanovsky before Sven Reichardt flopped two pairs (with Q♣ 10♠) to capture a half million chip pot from Klein.

Shak, Klein and Reichardt all go out to Big Pairs

However, as the blinds rose to 50,000/100,000 (ante 10,000), it was Olivier Busquet who surged into the chip lead with the elimination of Dan Shak. Shak had three-bet Sam Trickett´s opening raise up to 425,000 chips with A♠ 8♠, and when the action folded to Olivier Busquet, he raise the betting to 930,000. Trickett got out of the way, and Dan Shak announced he was all-in. Busquet snap-called and turned over A♥ A♦. Shak flopped two spades, but those were the last black cards he saw and he was sent to the rail in eighth place.

Shak´s elimination sparked a series of K.O.´s, with Busquet being the primary beneficiary. Morton Klein quickly knew his fate when jamming all-in for 1.78 million chips with A♠ Q♣ and running into Busquet´s A♦ A♣. Sven Reichardt undid all his good work by shoving all-in with 7♦ 5♦ and losing most of his stack to Daniel Colman (Coleman´s K♥ Q♥ flopping trip Kings) before running the last of his stack into Daniel Coleman´s K♥ K♣ with 10♠ 10♣ – Reichardt out in sixth.

The Quick Blast of Eliminations Continue

Sam Trickett bust in the very next hand – his unrecorded cards failing to improve past Olivier Busquet´s flopped set of Eights, and a couple of hands later Scott Seiver became the latest victim of an Ace-Queen shove, when Daniel Coleman (J♥ 9♥) spiked a Nine on the River to eliminate Seiver in fourth place – Seiver having moved all-in with A♥ Q♦.

Vladimir Troyanovsky was the only player now standing between a Coleman-Busquet finale; and he departed three hands later when his A♦ 8♥ failed to connect with the board and was bested by Olivier Busquet´s pocket Fives.

Busquet quickly took back the chip advantage with a Pair of Nines followed by a paired Ace, and then bluffed Dan Colman out of a 6 million chip pot with nothing better than five-high against Colman´s paired K♦ J♣. Colman again battled back, and trip Deuces enabled him to recover to 6 million chips, only for Busquet to lay a trap with a rivered Full House against Colman´s trip Eights to increase his advantage to 16.785 million -v- 2.470 million chips.

The flop came down 8♠ 2♦ 2♣, keeping Colman ahead in the hand, but Busquet caught the Q♦ on the Turn to make Busquet an 86% favourite to win the hand and the EPT Barcelona Super High Roller. Favourite backers were not disappointed as the 10♥ blanked on the river, giving Busquet the Super High Roller title and €896,434 first prize.