There was a fantastic turnout for the first leg of the Grosvenor UK Poker Tour in London this weekend; with the eventual winner being Oliver Price for £86,400. 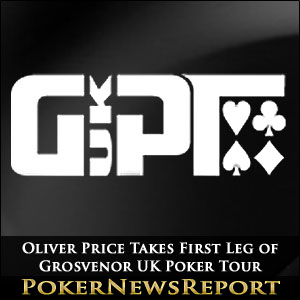 There was a fantastic turnout for the first leg of the Grosvenor UK Poker Tour in London this weekend; with the eventual winner being Oliver Price for £86,400.

The first leg of the 2014 Grosvenor UK Poker Tour (GUKPT) was played at The Poker Room (above the Grosvenor Victoria Casino in London´s Edgware Road) this weekend, with the Main Event carrying an eye-catching £200,000 guarantee for a £1,000 buy-in.

Any fears that the guarantee was too ambitious were quickly dismissed on Day 1A of the tournament, when 149 players entered the first of two opening flights. A further 174 players joined in with the fun on Day 1B to create a massive prize pool of £323,000.

The bubble burst late on Saturday night, when Neophytos Neophytou ran his Ace-Nine into Michael Quinn´s pocket Aces on a Nine-high board, and 27 players returned to The Poker Room on Sunday to play out the climax of the GUKPT London Main Event.

Laronde made it to the final table, but on his way fell to less than 100,000 chips after doubling up Ben Vinson 9♥ 9♣ > K♥ K♠ (Laronde flopped a set of Kings – Vinson rivered a gutshot straight) and Alan Mansbridge Q♥ Q♦ > Q♣ 9♣ (Laronde flopped Trip Nines – Mansbridge rivered a Full House with a one-outer).

Laronde recovered when his A♣ A♠ held in a three-way pot against Matt Frankland´s 10♥ 10♠ and Leon Mills 7♦ 7♣; but it was Philippe Souki who had the advantage when the nine-handed final table was set, after winning a three-way pot with pocket Jacks that sent both Louise Duffy (21st place) and Harry Law (20th place) to the rail, rivering a Flush to eliminate Carlo Citrone in thirteenth place and busting out Steve Watts in eleventh place pocket Jacks > pocket Sixes.

Andrew Christoforou and Mick Quinn both made important double-ups during the first level of the GUKPT London Final Table, but Quinn was eventually to be bust in seventh place when he tried to force Oliver price off of a pot with 5♠ 4♠, but Price´s 10♣ 10♥ held to move him into the chip lead – a lead he extended when busting Matt Frankland in sixth A♠ J♦ > Q♦ 10♣.

David Laronde´s demise came in three pivotal hands. In the first he doubled-up Andrew Christoforou (A♥ A♦ > unrecorded hand), then lost a stack of chips to Philippe Souki when his A♠ 8♠ failed to improve past Souki´s J♥ J♦ and was sent to the rail in fifth place by Oliver Price A♥ 10♣ > Q♥ 7♣ following a three-Heart flop which failed to materialise into a flush for either player.

Alan Mansbridge had done particularly well to survive through the early levels considering his relatively lowly chip stack when he entered the final table, and he managed a couple more double-ups in the next few levels to emerge as a genuine contended. In the first, his K♣ 3♠ was good enough to get home against Andrew Christoforou´s J♦ 10♥, and he then reduced Philippe Souki to just 300,000 chips when Mansbridge´s K♦ K♣ held against Souki´s A♥ Q♣.

Philippe Souki eventually departed in fourth place when he moved all-in with A♥ 9♣ and got a call from Oliver Price (J♦ 8♦). Price picked up a Flush draw on the flop of Q♦ K♦ 5♠, and then took the lead in the hand when the J♣ was dealt on the Turn. Souki still had a chance of doubling up with either an Ace or a Ten (for the straight draw), but the 5♥ bricked on the River to bust Souki in fourth place.

The early exchanges between Oliver price and Alan Mansbridge saw Mansbridge close the gap on the chip leader; but the GUKPT London Main Event was to come to a quick conclusion on a board of 8♣ 7♣ 4♣ / A♥. Mansbridge announced he was all-in after Oliver Price´s post Turn bet of 240,000 chips, and Price made the call:

Mansbridge: J♣ 7♥ for second pair and a Club flush draw

Price needed to dodge a Seven or a Club to win the GUKPT London Main Event and, after a nervous wait, the dealer spun over the 8♥ to give him trip Eights and victory in the first leg of the Grosvenor UK Poker Tour.