Ukrainian poker player, Oleksii Kovalchuk, has stormed into a massive lead on Day 2 of the Partouche Poker Tour in Cannes. 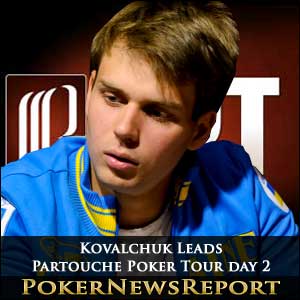 Ukrainian poker player, Oleksii Kovalchuk, has stormed into a massive lead on Day 2 of the Partouche Poker Tour in Cannes.

When the chips were counted at the close of play last night, the 21 year-old from Kiev had almost double the number of chips of second placed Juan Maceiras and Day 1 chip leader Giuseppe Pantaleo, who now lies in third position.

When Day 3 commences later on today, Oleksii will have 892,500 chips in front of him – more than five times the average and equivalent to 372 big blinds!

Is Oleksii Kovalchuk an Enigma?

Oleksii only emerged on the live poker radar seven months ago after taking the Russian Poker Tour Main Event in his home town for $123,456. Having just turned 21 years of age, he travelled to the World Series of Poker where he cashed three times and collected a bracelet for victory in the $2,500 NL Hold´em 6-max event (plus $689,739), and just last weekend he captured the Italian Poker Tour Main Event in Nova Gorica for a further $205,975 – taking his live poker winnings to over $1 million since February. With a huge chip advantage, it would be no surprise if he collected another million in the Partouche Poker Tour Main Event.

A Good Day for the British

British players love to return from Europe with a pocket full of Euros, and there is nobody they are happier taking money off than the French! John Eames, James Bord, Sam Trickett and David Vamplew all experienced the up and down days that occur in major live poker tournaments, but all will be returning for Day 3 with chip stacks large enough for them to get into the money. The top 63 get paid, with a minimum cash of €12,000, so good luck to all four players.

Top Chip Stacks and Selected Others