Oleksii Khoroshenin became Ukraine´s first EPT Champion after battling through one of the longest final tables in EPT history to take down the Main Event. 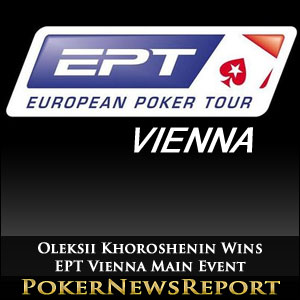 Oleksii Khoroshenin became Ukraine´s first EPT Champion after battling through one of the longest final tables in EPT history to take down the Main Event.

Despite there being a lack of “established” stars at the climax of the EPT Vienna Main Event, the climax of the tournament was as engrossing and as spectacular as any witnessed on the PokerStars-sponsored European Poker Tour this season.

Going into the sixth and final day, each of the eight remaining players was relatively well-stacked – and relatively young, with 44-year-old Rumen Nanev being the only player aged older than twenty-seven years.

There was also a potential “rags-to-riches” story concerning 20-year-old qualifier Pablo Gordillo, who was aiming to become Spain´s first EPT Champion after having been reduced to fewer than 4,000 chips on Day 1 of the tournament.

When play resumed at the spectacular Hofburg Palace in Vienna, just a few minutes remained in Level 26 (blinds 20,000/40,000 – ante 5,000) and there was no hanging around. Marko Neumann improved his position in the first hand of the day when his A♥ Q♥ flopped a better pair than Frei Dilling 10♦ 8♠, and then Timo Pfutzenreuter and Pablo Gordillo exchanged places on the leaderboard in the second hand of the day when Pfutzenreuter´s Q♣ J♦ turned an Ace-high straight.

Rumen Nanev became the shortest stacked player when his A♦ Q♥ failed to improve past Oleksii Khoroshenin´s J♥ J♣, and Marko Neumann went from second-last to first with a turned Full House against Pfutzenreuter, and then victory in a 1.5 million chip pot against Anthony Ghamrawi A♣ Q♥ > 7♦ 4♥. Nanev was eventually to be the first player eliminated from the EPT Vienna Main Event final table when shoving all-in with A♣ K♥ and – despite rivering the A♦ – failing to best Oleksii Khoroshenin´s (Q♣ Q♠) flopped set of Queens.

Going into Level 29 (blinds 40,000/80,000 – ante 10,000), Oleksii Khoroshenin moved into the chip lead when his A♣ 6♠ paired on the flop and Anthony Ghamrawi (K♦ Q♥) missed his straight and flush draws, but he was almost immediately overtaken by Marko Neumann – who eliminated Frei Dilling in seventh place A♣ 4♣ > K♣ 7♣. Neumann then started to boss the six remaining players, and took his stack above 10 million chips when flopping two pairs with Q♣ 9♦ against Khoroshenin´s pocket Fives.

Khoroshenin gave chase, and took down a massive pot against Anthony Ghamrawi (A♣ Q♣) and Pablo Gordillo (J♥ J♦) when his 7♣ 6♠ flopped an Eight-high straight, and Ghamrawi bounced back into third place when busting the practically anonymous Simeon Naydenov in sixth place 10♠ 10♣ > A♠ J♠. Oleksii Khoroshenin eventually caught Marko Neumann at the beginning of level 30 when he hit trip Aces with A♥ 8♦ and forced Neumann out of a million chip pot.

Timo Pfutzenreuter was particularly unfortunate to bust from the EPT Vienna Main Event final table in fifth place, having got the last of his chips in with 6♦ 6♥ and hitting a set on the flop of 7♥ 6♠ 5♣. Unfortunately he had been called by Anthony Ghamrawi, who was holding 7♦ 7♠ for a better set, and who hit a set of tens in the next hand to take chips from both Neumann and Gordillo.

With blinds now at 50,000/100,000 (ante 10,000), Pablo Gordillo was now becoming detached from the three pacesetters, and he chose to shove all-in with A♠ K♣. He was called by Marko Neumann, whose 10♦ 10♠ held to eliminate the Spaniard in fourth place and, while the dinner break was taking place, the three remaining players negotiated a deal which would lock up the following amounts and leave €50,000 to play for:

Following the return from dinner, the lead changed hands multiple times before the heads-up was set. Oleksii Khoroshenin initially moved ahead when his A♦ 3♣ hit two pairs against Marko Neumann, before Anthony Ghamrawi doubled-up against the Ukrainian 10♣ 7♣ > 8♦ 8♣ to put Neumann back ahead. Ghamrawi then demoted Khoroshenin into third place when his pocket Tens held against Khoroshenin´s K♠ Q♣, before the positions were reversed when Khoroshenin doubled-up with A♠ A♦ > 6♦ 6♥.

The pivotal hand of the EPT Vienna Main Event came deep into level 32 (blinds now 80,000/160,000 – ante 20,000) when Marko Neumann (K♦ 7♥) and Oleksii Khoroshenin (8♠ 8♥) played out the biggest pot of the tournament. There were already a million chips in the pot when the two players saw the flop of 8♣ K♥ 7♠ after which Khoroshenin raised the stakes another 500,000 chips. Neumann called, and called Khoroshenin´s bet of 1,075,000 chips after the 4♠ on the Turn. The 7♣ on the River gave both players Full Houses (Khoroshenin Eights over Sevens/Neumann Sevens over Kings) and after Oleksii Khoroshenin bet 2,675,000 chips, Marko Neumann announced he was all-in. Khoroshenin had no hesitation in calling and turned over the winning hand.

The unfortunate Marko Neumann was eliminated by Oleksii Khoroshenin just a few hands later. The chips had all gone into the pot after the flop of 9♠ 8♠ 7♣, with Neumann holding 9♠ 8♣ for two pairs, but Khoroshenin holding J♦ 10♠ for a flopped Jack-high straight. With no Nine or Eight to save him on the Turn (2♣) or River (4♦), Marko Neumann was eliminated from the EPT Vienna Main Event in third place, while Oleksii Khoroshenin took a 20.72 million -v- 6.525 million chip advantage into the heads-up against Anthony Ghamrawi.

910 players had ponied up the €5,300 buy-in to the EPT Vienna Main Event, with the top 135 players cashing in the event. Those who made it into the money included Bertrand “ElkY” Grospellier, David Vamplew, Viktor Blom, Gus Hansen and Jonny Lodden, with those who appeared at the final table winning the following amounts: