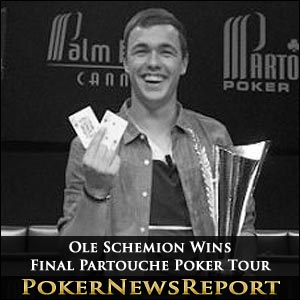 Ole “wizowizo” Schemion is enjoying a pretty good year. In the past twelve months, he has recorded cashes in EPT´s, IPT´s, WPT´s and a UKIPT, and yesterday he added a PPT to his collection with victory in the 5 million Euros guaranteed Partouche Poker Tour Main Event.

Joining them for the finale to an event which had been overshadowed by Partouche´s initial refusal to honour the tournament guarantee were Day 1 chip leader Marcello Marigliano (3,165,000 chips), last Frenchman standing Fabrice Touil (2,555,000 chips), American Dan O´Brien (2,500,000 chips) and Australian Aaron Lim (1,470,000 chips).

No French winner of PPT as Touil First to Bust

Aaron Lim was the first player to make any significant move – doubling up against Fabrice Touil with a flopped set against Touil´s two-pair – and, when the Frenchman tried to recover some of his chips with pocket Fours against Schemion´s A♥ 10♠, the 10♣ on the flop ended the last French participation in the event.

Marcello Marigliano was the next player to depart, running his pocket Jacks into Schemion´s pocket Kings, and the German´s chip advantage grew even bigger when he dispatched Dan O´Brien in fourth position – O´Briens pocket Nines failing to hold against Schemion´s A♦ K♣.

Aaron Lim had played with considerable patience after his early double up to remain active in what was quickly becoming a very one-sided affair, but he chose the wrong moment to slide his chips into the middle with A♠ K♥ – as Schemion was holding A♦ A♣.

No Deal in the Heads-Up

Sarkisyan, holding A♥ 9♣, got all his chips in the middle following the flop and turn of 7♥ 8♥ 9♥ / 6♣ (top pair and nut flush draw). Schemion snap-called with K♥ 2♥ for the second nuts draw. The J♠ river card could not provide Sarkisyan with the heart he needed to best Schemion´s flush and the German became the last ever Partouche Poker Tour Main Event winner.