Ole Schemion took less than three and a half hours to dispatch his final table opponents and win the €10,000 buy-in EPT San Remo High Rollers event for €265,000 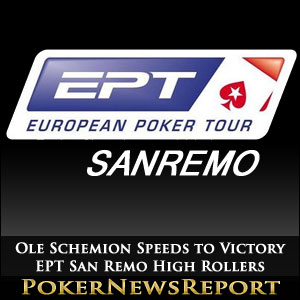 Ole Schemion took less than three and a half hours to dispatch his final table opponents and win the €10,000 buy-in EPT San Remo High Rollers event for €265,000

There was a rapid conclusion to the EPT San Remo High Rollers event as Ole Schemion devastated his final table opponents with a succession of good hands and then took an unassailable lead in the heads-up when catching Max Greenwood bluffing.

After two days of action, Schemion came to the final table third in chips after a successful end to Day 2 in which he had doubled up against Dimitar Danchev 8♠ 8♥ > A♠ J♣ before busting David Vamplew in tenth spot A♦ Q♠ > Q♣ Q♥ on the perfect flop of J♦ K♥ 10♥.

Ben Mahmoud Out in First Hand – Greenwood and Schemion on Fire

The eliminations started in the first hand of the day when Imed Ben Mahmoud moved all-in with A♦ Q♣ and ran straight into Philip Sternheimer´s A♣ A♠. The Tunisian failed to improve past Sternheimer´s Aces and was bust in eighth place; but Sternheimer was unable to take control of the event and doubled-up Ole Schemion Q♠ 5♦ > 5♥ 9♣ (on a Five-high flop) to be reduced to 550,000 chips.

Max Greenwood also started well, and rivered a set of Eights to cripple Tamer Kamel, prior to eliminating him in seventh place (Q♠ J♠ > A♣ 5♥}) when flopping trip Queens; but Ole Schemion passed him at the top of the leaderboard by busting out Griffin Benger in sixth place (A♣ K♥ > A♠ 5♥}) and sending Mustapha Kanit to the rail in fifth place A♦ 7♦ > A♠ 4♥.

Schemion Takes Out Two More to Lead into Heads-Up

The pace of the game failed to slow down, and Ole Schemion bust two further players in consecutive hands – his first victim being former chip-leader Philip Sternheimer, who ran pocket Jacks into Schemion´s A♠ A♥, and then Alex Bilokur (J♥ 2♥) who moved all-in with the bottom pair on the flop of 2♠ 6♦ A♠ and finding Schemion (A♥ 7♠) had flopped the top pair.

Ole Schemion´s four knock-outs had given him a 3.475 million -v- 1.775 million chip advantage going into the heads-up against Max Greenwood, and he extended his lead further when catching Greenwood bluffing in a pot worth 645,000 chips. Aggressive play in the next three hands reduced Greenwood´s stack to 1.2 million chips, before the final hand of the EPT San Remo High Rollers heads-up.

In the deciding handoff the EPT San Remo High Rollers, Ole Schemion had raised to 65,000 chips and Max Greenwood three-bet to 170,000. Schemion responded by raising to 333,000 chips, after which Greenwood announced he was all-in. Schemion made the call and the cards were on their backs:

Both players caught a pair on the flop of J♣ 4♦ 9♠, but Schemion was a long way ahead and only a runner-runner flush or a two-outer could save Max Greenwood. The title was virtually a certainty after the 6♣ was dealt on the Turn, and Ole Schemion was confirmed as the EPT San Remo High Rollers Champion when the 10♦ on the River failed to improve Greenwood´s hand.