Ole Schemion on Top of EPT High Rollers after Day 1

After an eventful Day 1 of the EPT Barcelona High Rollers Event, Ole Schemion leads the field courtesy of a double knock-out towards the end of the day. 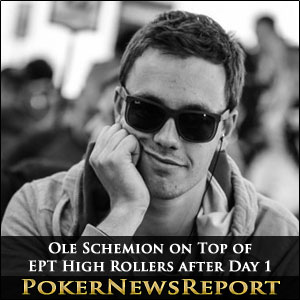 After an eventful Day 1 of the EPT Barcelona High Rollers Event, Ole Schemion leads the field courtesy of a double knock-out towards the end of the day.

The $10,000 buy-in single re-entry EPT High Rollers provides an opportunity for many of the more recognisable faces in the poker world to play against each other without being swallowed up by the numbers that attend a Main Event.

The event is becoming more popular each year and, despite late registration and re-entry being open until 11.45am this morning, 168 players have already reached deep into their pockets to pony up the $10,000 buy-in (some twice) – 57 more than competed in the EPT Barcelona last year.

Ole Schemion Has a Big Lead

Since winning the last ever Partouche Poker Tour, Ole Schemion has taken down the Masters Classic of Poker in Amsterdam, the Lebanese Poker Championship in Kyrenia, led the field at the ISPT Wembley and won three events at the EPT Grand Final in Monaco.

Already this week he was the chip leader on the Final Table of the EPT Super High Rollers and, at one stage, he was in control of the EPT Barcelona Main Event. Now he leads the EPT High Rollers thanks to a double knock-out in the last level of the day, Level 10.

Cowboys Get There for Schemion

Schemion needed to dodge an Ace or a Five to be catapulted into the chip lead and, as Lunkin and Verdickt looked helplessly on, the board of 10♣ 7♠ 2♥ / 6♠ / 6♣ failed to delivery any surprises. Schemion bagged up 393,600 chips at the end of play.

Chasing Pack a Long Way Behind

A long way behind Schemion, the chasing players are tightly packed. Igor Kurganov (315,300 chips) was elevated into second place when he eliminated the dangerous Sergio Aido K♣ Q♦ > K♠ 10♦, and Sam Greenwood (313,800) chips was for a long time the chip leader after rivering a Jack to get the better of Dan Smith A♠ J♠ > A♣ K♠.

Seng Yong (312,200 chips) spiked a Queen on the River to come from behind against Nadar Kakhmazov A♣ Q♣ > A♥ 10♥ after Kakhmazov had hit two pairs on the flop of 10♠ A♦ 8♣ and Barcelona soccer star Gerard Pique (308,500) was happy to sit out a two-hand penalty for exposing his cards early when his Q♣ Q♠ completed a better two pair than his unnamed opponent.

Daniel Negreanu has been a leading critic of the First Card rule, and yesterday the argument about whether it is good or bad for live poker was again in the spotlight after one of Negreanu´s hands was declared dead – causing the most famous face in poker to go on a very public tilt.

You can read all about the rule, the controversy and how Negreanu was originally eliminated from the tournament in our dedicated news item. However, once all the fuss had died down – and Negreanu had vented his spleen on Twitter – he chose to use his second bullet within a couple of hours, and finished the day slightly above his starting stack with 50,400 chips.

Day 2 will begin with the 90 existing survivors and any late registrations/re-entries on Level 11 (blinds 1,000/2,000 – ante 200), with play scheduled for another ten levels or until a final table of eight is reached. The prize money for the EPT Barcelona High Rollers Event will not be known until all the registrations are completed, but those with the best chance of a share of it include:-