Ole Schemion heads the ninety-nine remaining players in the Ill-Fated Stadiums Poker Tour at Wembley after the bubble burst in the early levels of Day 3. 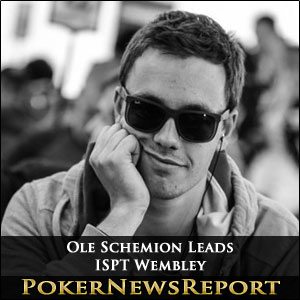 Ole Schemion heads the ninety-nine remaining players in the Ill-Fated Stadiums Poker Tour at Wembley after the bubble burst in the early levels of Day 3.

German poker player, Ole ‘wizowizo’ Schemion, has gone from strength to strength since winning the last-ever Partouche Poker Tour last September. In between beating up the online tables, Schemion has taken down the Masters Classic of Poker in Amsterdam, the Lebanese Poker Tour Championship in Kyrenia, three side events at EPT Monte Carlo and final tabled the PokerStars Caribbean Adventure Super High Rollers Event.

Schemion – who is too young to play in Vegas – will enter Day 4 of the International Stadiums Poker Tour at Wembley with a big chip advantage over local London player Neil Bernardout and a bigger gap back to France´s Alban Juen and Manchester´s Ben Middleton in pursuit of the €1,000,000 guaranteed first prize up for grabs when the tournament reaches its climax on Wednesday.

Players in the Money

411 players returned for Day 3 of the ISPT at Wembley and, despite only 380 due to cash in the event, there was no hanging about at the tables. Both Peter Roche (A♠ 10♣ < A♥ J♣) and Yvon Aouizerate (A♥ Q♦ < K♣ K♠) were bust within the first few hands of the day and Matt Frankland ended Jose Garcia´s Wembley Dreams when his Q♦ 10♦ connected with the Q♣ on the flop to best Garcia´s A♣ 6♣.

Two players shared the honour of being the Wembley ‘Bubble-Boy’ – David Gent (A♦ Q♠) needed a five to stay alive on a board of 4♣ 3♠ 2♣ against an opponent who tabled 3♥ 3♣ for a set. Unfortunately for Gent, the board finished K♠ 2♠ and he looked as if he were to be eliminated in 381st place. However, at the same time Tomasz Gluszko got the last of his chips into the middle with A♣ Q♣ against Rhys Jones (K♥ K♠) and still had plenty of outs after the board was dealt K♠ 10♠ Q♠ / A♥, but the 6♦ on the turn ended Glusko´s participation in the tournament, and he and Gent each received €270.00 as a share of the lowest payout.

Thereafter the eliminations came so thick and fast that a whole level was chopped off the day´s play. Ross and Barney Boatman of the Hendon Mob were sent home to pack their bags for Vegas, while Boris Becker was eliminated when his opponent served a pair of Aces (geddit?) and Tony G lost all his chips in three hands to the same player after being ahead in each. Jamie Burland, Pieter De Korver and JP Kelly also joined the traffic around the North Circular Road to Heathrow, while ISPT Ambassador Liz Lieu managed a min cash to almost make her participation in the event worthwhile.

The prize money was announced shortly before the bubble burst and it came as no surprise that there was going to be a massive overlay, but the size of it – €589,060 – drew a gasp of breathe (and a spontaneous round of applause). Players who ponied up the €3,000 buy-in to enter the tournament directly on Day 2 will have to finish in the top 81 players to get their money back, while those who bust out on day 2A and re-entered on Day 2B will have be in the top thirty-six players before making a profit on their investment.

With the action on the pitch wrapped up, the 99 remaining players will take their seats in the Bobby Moore Centre today for the delayed start to Level 18 (blinds 5,000/10,000 – ante 1,000). Behind chip leader Ole Schemion are a host of well-known European and UK poker players including Dave Ulliot (700,000 chips), Nik Persaud (490,000 chips) and Praz Bansi (275,000 chips), while those with the best chance of taking home the €1 million first prize include:-