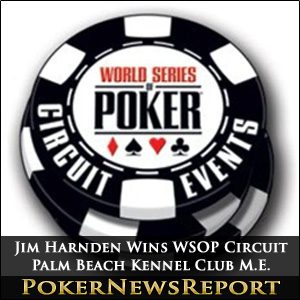 The experienced Jim Harnden led a Canadian cross-border charge when winning the $1,600 buy-in World Series of Poker Circuit (WSOPC) Palm Beach Kennel Club main event in Florida for $226,395 – and his first ever cash in a WSOP event!

The 58-year-old Ontario native outlasted 777 other entrants over three days in West Palm Beach to secure the top prize and a gold ring after ultimately defeating Rob Williamson in their heads-up encounter that left the American with $139,574 for his runner-up spot.

Incredibly, with poker becoming such a young man’s game, Harnden’s head-to-head opponent was 44-year-old Williamson – with these two players seeing off the many twenty-somethings at the final table.

Harnden – a contractor from Cobourg – is travelling throughout North America right now and gets in some poker whenever he can, this time ending up in Florida for his greatest success during a five-hour final table.

His previous biggest cash, for $18,022, came back in August of 2008, when he won the C$500 buy-in No-Limit Hold’em event at the Great Blue Heron Charity Casino stop of the Canadian Poker Tour (CPT).

But the friendly and upbeat veteran was not surprised by his success in Florida, saying that he had “a bit of experience” on his younger final-table opponents because of what he has “learned over the years”.

Two other Canadians made the top five, with Ottowa’s Matthew O’Brien picking up $102,898 for his third place finish, while Jamil Wakil, from St Catharines, secured fifth for $57,294 in his 16th WSOPC cash.

The other final table finishers were all American as Pennsylvania’s Roman Valerstein exited in fourth place for $76,692, Nebraska’s Drazen Ilich collected $44,317 in sixth, David Stefanski, of Connecticut, took seventh for $34,333, Florida’s Sterling Savill picked up $26,930 in eighth, and Ohio’s Chris Parsons cashed for $21,383 in ninth spot.

Just 21 players remained in contention as Day 3 started, but it all came down to Harnden versus Florida’s Williamson for the top prize after the former had dominated the last day.

It took just over four hours for the final nine to be reached as another Florida native, Nabih Zaczac, hit the rail in 10th place for $17,184. Thereafter, Harnden – who started the nine-handed climax third in chips – made his charge to glory.

Having eliminated 21-year-old student O’Brien in third place, Harnden enjoyed a 3.5 to 1 chip advantage over Williamson as they met face to face as the final two players seated.

Just two hands in, we had our champion as Harnden three-bet all-in with Ks-Qs to bet met by the Ah-Kh of the American.

The Canadian was well behind, but all that changed when the flop of Qc-10s-7c arrived to give Harnden top pair. The 6d turn changed nothing, while the 8c completed the board to leave the Canuck as champion.

His victory did not just give Harnden his biggest ever cash, but also a seat at the WSOP Circuit National Championship at the Rio All-Suite Hotel & Casino come May as part of the 43rd staging of the World Series of Poker in Las Vegas.

He will be joined by 99 other players from the WSOPC as they attempt to collect a WSOP bracelet and the top prize of $1 million.

Poker Pro Parsons – at his fourth final table this year – was the first player to exit the final table in ninth place when he shoved his last 487,000 chips with Ad-10h, but ran into the As-Ac of Wakil, who was on the button.

The 10s-9h-8s flop gave the 25-year-old some hope with a pair of tens, while the Qh turn also gave provided him with four split pot outs. However, the 3d river was a blank so ending his day.

Sterling Savill Out in Eighth Place

The Tampa native, in middle position, shoved his last 234,000 into the pot while holding Kh-Jh and was called Harnden, who was in the hijack seat. The action folded to small blind O’Brien, who then re-raised that to 500,000, leaving Harnden to give his next move some thought before folding.

O’Brien revealed Ah-As to be miles in front and prompt Savill to rise from his seat before the dealer laid down 8d-5c-2h on the flop. That was no good to Savill, but the Js did provide him with some hope with a pair to give him five outs for the win. However, the 8c on the river was not one of those cards and Savill was gone.

The Ad-Js-4c gave Stefanski the lead, but the 5d on the turn handed Ilich trip fives, although that card also gave the former a flush draw and a chance to double-up, if he could avoid the 4d. Of course, that exact card arrived on the river as Ilich completed his full house.

Action slowed down somewhat for the next two hours, before Ilich exited in sixth place during level 29.

But Ilich was not put off by this raise and moved all-in for approximately 2.6 million total – and was called by O’Brien for a huge pot of more than five million.

The showdown saw O’Brien reveal Ac-Kd, while Ilich held 9c-9h to be slightly ahead. The Qs-Jh-8s was good for Ilich, although it did provide O’Brien with four extra outs with a gutshot straight draw.

But the As on the turn shot O’Brien ahead to leave 32-year-old Ilich needing one of the two nines remaining in the deck. The river was, however, the 6h and Ilich was off to pick up his cash for sixth place from his fifth WSOPC final table without a victory.

Wakil – who had taken the early chip lead at the final table – was next to go in fifth place when coming up against Harnden after losing a chunk of chips to Williamson the hand before.

That first hand saw 21-year-old online specialist Wakil three-bet shove on an As-Qh-9s flop, to be called all-in by Williamson.

Williamson showed Kd-10s to have a Broadway straight draw, although he was well behind the two pair of Wakil, who held Ah-Qd. But the Jd on the turn was enough to give Williamson his straight and send Wakil hurtling down the chip count.

Wakil didn’t last much longer as, in the hijack seat, he opened for 110,000 and was called by big blind Harnden.

The Kc-Kh-3c flop then saw Harnden lead out for 260,000 and Wakil call to see the 5h arrive on the turn. The former remained aggressive to bet 500,000, only for Wakil to swiftly move all-in for an additional 650,000 or thereabouts.

Harnden took his time, thinking through the action that had preceded Wakil’s all-in move, before calling after about three minutes to show 4s-4d and shock his opponent, who showed Js-7s to be well behind.

Wakil had nine outs to stay alive, but the 2d on the river was not one of them and he was eliminated in fifth place.

The last four players then took a half-hour break, before returning fully refreshed and ready to up the aggression as Valerstein exited in fourth spot.

The 25-year-old pro was under the gun when he moved all-in for about one million and was called by Harnden as the blinds moved out of the way.

Valerstein showed 5h-5s to enter a coinflip with Harnden, who revealed his hole cards as Ac-Ks. The 8c-6s-Kd flop was not what Philadelphia’s Valerstein wanted to see, though, as this left him with just two outs or runner-runner to survive.

The 9c turn added a little extra tension to the showdown as Valerstein – who won the WSOPC’s $200 buy-in No-Limit Hold’em Turbo event for $17,507 back in March of 2010 in Atlantic City – found one of his straight cards, only for the Jd on the river to end his tournament.

O’Brien called that raise and called once more when Harnden placed 500,000 into the pot after the 7c came on the turn. The river was the 6c and Harnden continued with his aggressive play to add 1.1 million to the ever-growing pot.

But O’Brien shoved all-in for his remaining chips and was instantly called by Harnden, who showed 10s-6s for two pair and the knockout as the loser’s bluff with Kd-8d failed dramatically.

That left us with just Harnden and Williamson to fight out a quick heads-up battle that resulted in the Canadian scoring his first major title.

Organisers will be happy with the event, too, as the attendance was up by almost 5% as 34 additional players lined up compared with the 742 that registered for the inaugural WSOPC appearance in Florida last year.

Meanwhile, the WSOPC’s next stop arrives in Caesars Atlantic City for 12 days from March 1 to 12. If you are interested in checking out the full WSOPC schedule, then get on over to WSOP.com.