Two tribes in Oklahoma are hoping to offer online poker and gambling internationally that would not be available to U.S. players. 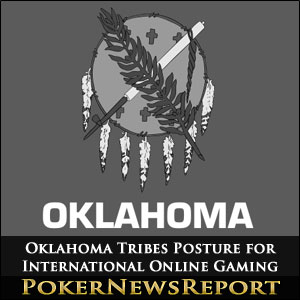 Two tribes in Oklahoma are hoping to offer online poker and gambling internationally that would not be available to U.S. players.

In a move that some consider to be a step backwards in advancing online gambling legislation in the U.S., the Arapaho and Cheyenne tribes are pushing for federal approval of their plan that would leave Oklahoma residents and the rest of the country watching from the rail. Though the state and tribes would likely see a windfall of revenue generated by the scheme, U.S. players would be left out.

A pact between tribal leaders and Oklahoma Governor Mary Fallin was signed several months ago that would allow Oklahoma state coffers to reap 20% of the profits that the gambling sites earn, Indian Country Today Media Network reported. The governor of both tribes, Janice Prairie-Chief Boswell, has called the proposal a “win-win” for everybody involved.

However, Oklahoma residents and players in other states may see the situation differently since there is no current plan to include U.S. players. It could conceivably hurt U.S. efforts at online poker and gambling legislation.

On the other side of the coin, the regulated operation of online gaming sites within state borders could eventually lead to approval within Oklahoma and a possible interstate scheme down the road. Should the sites be a smashing success, lawmakers may look more favorbaly toward extending availablity to Oklahoma and U.S. residents. What is most troubling at this juncture is the fact that the Oklahoma tribes are seeking to exclude residents within the state while other states are enacting and considering legislation that would allow U.S. players to participate.

The Cheyenne and Arapaho tribes have been posting ads locally in support of their international Internet gaming proposal. The pair hope to sway lawmakers who may be influenced by larger tribes that tend to use their political muscle and clout by keeping the smaller tribes from making advances financially.

The Oklahoma tribes had been running a free-play gaming website that was open to U.S. players but were forced to suspend operations in April when it was discovered that such a venture is not permitted in the tribal gaming compact. A peek at pokertribes.com reveals that social gaming is no longer offered. The site currently touts its hopeful upcoming foray into international online gambling, excluding U.S. players.