An Oklahoma tribal faction has filed a federal lawsuit against the U.S. Dept. of Interior in hopes of being permitted to run an online gambling website. 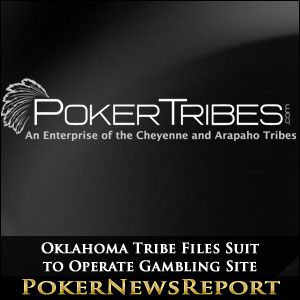 An Oklahoma tribal faction has filed a federal lawsuit against the U.S. Dept. of Interior in hopes of being permitted to run an online gambling website.

Permission had already been granted to the Cheyenne and Arapahoe tribe by Oklahahoma state officials when a compact agreement was brokered last April. The agreement calls for the tribe to operate PokerTribes.com, offering online poker and casino games internationally. Players within Oklahoma and the entire U.S. would not be accepted.

However, the Department of Interior put the kibosh on that plan in November, claiming that Oklahoma erred in allowing the tribe exclusivity to a market beyond U.S. borders. The Cheyenne and Arapahoe tribe filed a federal complaint in Oklahoma City in late December in an effort to prevent the federal government from intruding, The Oklahoman reported.

The tribal compact signed by Oklahoma Governor Mary Fallin calls for the state to receive 4% of $10 million in annual revenue from PokerTribes.com. The state’s take increases to 5% if revenue reaches $20 million. Annual net revenue that exceeds $20 million escalates the share for Oklahoma state coffers to 6%, plus 10% monthly for card games such as poker that are not house-banked.

The Cheyenne and Arapahoe tribe estimates that if 2% of the global gaming market is reached, over $130 million could be generated on an annual basis within five years. Their agreement with state officials is the only one of its kind in the U.S. that would allow a native tribe to operate a gaming website on Indian land that would cater only to players abroad.

As many are aware, three states enacted online poker and gambling legislation and launched an assortment of sites last year. However, those gambling websites are currently operating on an intrastate basis. The right of a state to legally and exclusively allow one tribe to accept international players has only been attempted in Oklahoma thus far.

PokerTribes.com was operating as a free-play site until the first week of April, 2013, when Oklahoma state officials shut it down as being in violation of the tribal gaming compact agreement. It was then that a pow-wow between tribal leaders and state officials allowing the tribal plan to operate a gambling website internationally emerged.

It is one thing for legislatures in states such as Nevada, Delaware and New Jersey to permit online gambling sites to players within their respective states. It is quite another for a state to allow one particular tribe to control a market that is outside of the state as well as being outside of the U.S.