Oh My! Guru Beauvois Leads WPT Mazagan to the Money

Clement “OhMyGuru” Beauvois extended his lead at the top of the WPT Mazagan Main Event – accumulating 50 percent more chips than his nearest competitor. 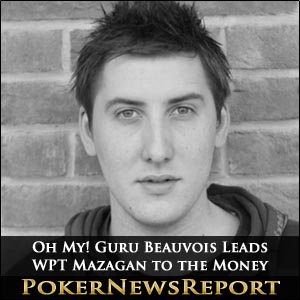 Clement “OhMyGuru” Beauvois extended his lead at the top of the WPT Mazagan Main Event – accumulating 50 percent more chips than his nearest competitor.

Only 25 players remain in the World Poker Tour Mazagan Main Event after a much more subdued day 2 than expected. By the end of the scheduled six levels, just a handful of players had an above-average chip stack – due to the distance Clement Beauvois had put between himself and the rest of the field – but, with some accomplished players still loitering in the middle of the chip counts, this tournament may be far from over.

One player most people would have expected to be still in the mix is Steve O´Dwyer. The amiable American – who has cashed in events hosted in eleven different countries in the past twelve months – enjoyed a quiet Day 1A (68,700 chips) behind the likes of Guillaume Darcourt and Fabrice Soulier and, within two levels of Day 2, had built his chip stack up to 195,000 to compete for the chip lead.

During an interview at the end of Level 10 (blinds 500/1,000 – ante 100) O´Dwyer commented that he had been lucky to be sitting on a table where players just wanted to give him chips, but it was O´Dwyer who became the most generous player of all when he six-bet jammed his chip stack onto the table with pocket Queens, only to run into the pocket Aces of Clement Beauvois.

Beauvois used his massive chip stack to bully his way through the remaining three levels and later admitted it had been “easy” and the board had always run kindly for him – citing the example of when he called Alexandra Petitjean´s 8♠ 8♦ shove with A♥ J♠, only to hit an Ace on the river and eliminate one of France´s most successful female poker players.

Few players are remotely close to Clement Beauvois in the chip counts. Prior to Beauvois busting of O´Dwyer, Jeremy Nock held a temporary chip lead after his A♣ 10♠ paired on the flop of A♥ 8♣ 2♣ and he managed to avoid the flush draw of Jose Gomez (Q♣ 10♣). Nock also accounted for a popular French female poker player in the shape of Lucille Cailly.

Cailly had herself got into contention when busting out Daniel “Jungleman” Cates in a AA > 99 hand during the first level of Day 2, but came unstuck when she attempted to bluff Jeremy Nock out of his nuts flush draw and then – with 10♦ 6♦ – ran the last of her chips into Nock´s Q♥ Q♦. Victor Choupeaux was able to haul himself into third position overnight, courtesy of Parisian Benjamin Pollak anticipating a Flush draw which never arrived.

The plan for Day 3 of the WPT Mazagan Main Event is to play down to a final table of six. Only eighteen of the twenty-five players that remain will cash in the tournament and, with Level 15 about to start (blinds 1,500/3,000 – ante 500), there will be plenty of players patiently nursing their stacks through the bubble.

An interesting table draw sees Nock and Choupeaux seated on the same table as Guillaume Darcourt, David Kitai and Fabrice Soulier, while the chip leader will be playing alongside the potentially dangerous Giacomo Fundaro, Paul Tedeschi and Sebastien Compte. You can find out which of these players make it through to the final table by following PokerNewsReport on Twitter.