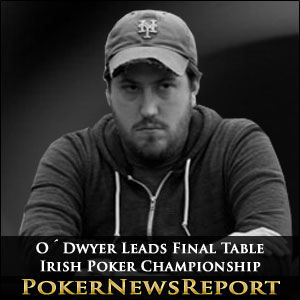 Day 2 of the Irish Poker Championship was a very short affair following the Day 1 carnage which saw 52 players reduced to a field of just 12 over ten levels of play. With only seven players to cash in the €2,500 buy-in event, the decision was made to play down to a final table on Day 2 and leave the majority of the excitement until Day 3.

Going into the second day, American poker player Steve O´Dwyer (265,400 chips) held 40 BB advantage over the UK´s Max Silver (216,500 chips) and Thomas Hall (186,100 chips) – an advantage which was to increase to a 137 BB advantage during the two levels of play which were concluded yesterday.

Unfortunately for fans of British poker, Jake Cody was the first of the twelve remaining players to bust out – shoving his last 20,000 chips with A♠ Q♠ into the pocket Sevens of Ireland´s Peter Murphy and failing to find the overcard he needed.

Soon after, Steve O´Dwyer extended the gap between himself and Max Silver when rivering an Ace flush against Silver´s missed straight draw, but Silver bounced back with the elimination of Jay O´Toole in tenth, when Silver showed trip Kings to thwart O´Toole´s bluff.

Two more British poker players were eliminated before the final table was set. Elior Sion had been managing a short stack all day, and was unfortunate to have his 10♣ 10♥ turned over by the 9♣ 9♥ of Marc MacDonnell when the 9♦ was dealt on the flop.

Looking Ahead to Day 3 of the Irish Poker Championship

However, when play resumes this afternoon at the Full Tilt Poker Village in Galway, the blinds will only be 1,000/2,000 with a 300 chip ante – such is the aggression that this event has been played at – and there could be a few surprises remaining in the Irish Poker Championship now that each of the players is assured of a cash and €39,450 going to the winner.